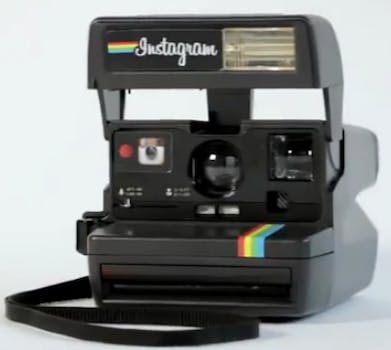 Web magazine The Verge has an “exclusive” look at the camera the photo software company is producing, with the aid of “the one billion dollars they got from Facebook.”

Why settle for digital versions of photographs, when you can hold them in your hand? The photos look just like the photo software!

Alas, it’s all just a joke—clever commentary on Instagram. The camera “created” in the parody ad is none other than the film-spewing retro version of the Polaroid instant camera.

It’s apparently not too much of a logical leap for many. Instagram can turn digital photos into Polaroid look-alikes, and many YouTube commentators were momentarily fooled.

More entertaining than that, however, was the bizarre debate between two YouTubers in the comments section.

Nbmatt asserted that there is “no purpose to Instagram,” which inspired a YouTuber who goes by Hulk Hogan to launch a series of philosophy-laden diatribes about the meaning of life.

There is no purpose to anything in life. That is the beauty and the betrayal of living. Things become important and matter to people. That importance is then confused with purpose. Knowing that we all die, and everything we have ever done or ever will do will one day disappear–what is the purpose of anything?

He’s not the first person to question the meaning of life after reading a YouTube comments section.