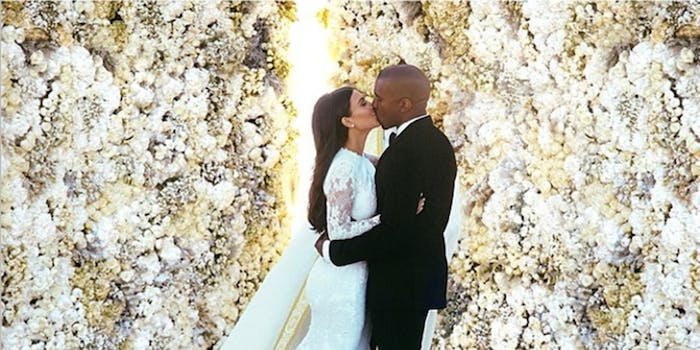 The most popular photo on Instagram is currently Kanye West and Kim Kardashian’s wedding photo, just to give you some idea of where we are as a culture. But that flood of likes apparently didn’t come easy.

West attended the Cannes Lions International Festival of Creativity on June 17, and dropped a bomb on the audience: He and Kim worked for four days to make the photo look good enough for Instagram, after Annie Leibovitz allegedly pulled out as their wedding photographer a day before the event. West went on to describe the four days of absolute torture that went into perfecting a promotional photo for a nearly $3 million wedding:

“Let me tell you something about that kiss photo that my girl put up … this was pissing my girl off during the honeymoon, she was exhausted because we worked on the photo so much because Annie Leibovitz pulled out right before the wedding. I think that she was, like, scared of the idea of celebrity.”

That sentence contains multitudes, doesn’t it? He claimed the flowers in the photo were “off color,” and that they worked so hard on getting everything right because of “how important Kim is to the Internet.”

“And the fact the No. 1 most-liked photo [on Instagram] has a kind of aesthetic was a win for what the mission is, which is raising the palette.”