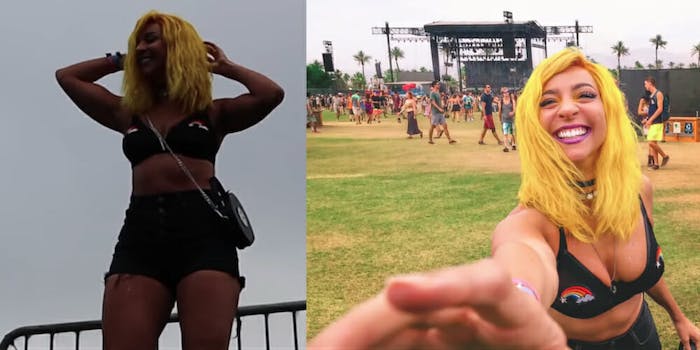 'Social media is a lie.'

Instagram influencer and YouTuber Gabbie Hanna faked going to Coachella in an elaborate scheme, doing so to make a statement about how a lot of what people see on social media is fake.

“Social media is a lie,” Hanna said. “I had the thought, ‘what if I could get the Coachella Instagram pictures without going to Coachella.'”

Hanna documented how she did it in a YouTube video, which now has nearly 3 million views, the New York Post first reported. She first did a photoshoot at Marina del Rey, and then photoshopped the photos of herself into “Coachella.” She even made her own “Coachella” wristband.

She was inspired by other influencers, many of whom faked elaborate trips to places like Disneyland.

In the YouTube video, Hanna admits that she is not the biggest fan of Coachella. She also said that she doesn’t think a lot of other people who enjoy it either—they just go for the ‘gram.

“There’s a lot of people who go to Coachella, who do not enjoy the experience, just because they’re going for Instagram pictures,” Hanna said. “And that to me feels stressful.”

She said people spend thousands of dollars and take weeks to prepare for Coachella. Hanna said that she even knows people who bring double the outfits to weekend one of Coachella to pretend like they also went to weekend two.

“It feels like a lot of work for something you’re not enjoying,” Hanna said.

She said this plot just proved how easy it is to fake things on social media.

“The whole time I was living my best life at Coachella, I was really just sitting in this editing chair,” Hanna said. “I know people look at people on Instagram and social media, and they think, ‘wow their life is impossibly perfect…’ so much of it’s fake.”