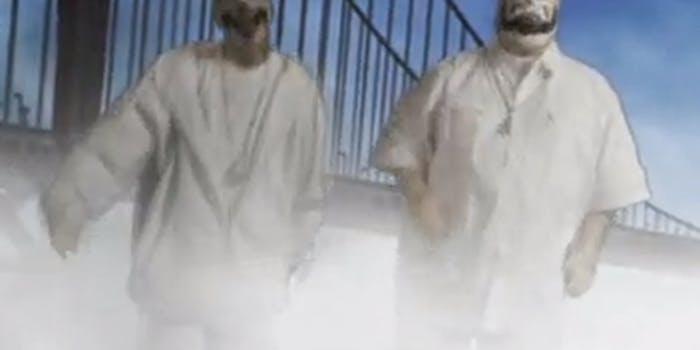 The horrorcore rap duo has launched an online campaign "for 'los and 'lettes to be heard."

It’s been a little over a month since Insane Clown Posse, the Detroit-based horrorcore duo who’ve built a multi-platinum career out of rapping about butts, nuts, and sluts, publicly declared their intention to sue the Federal Bureau of Investigation for labeling their fans a “loosely-organized hybrid gang.” Today, they began that bomb-ass super-fresh wig-flippin’ process.

Last October, the FBI’s annual National Gang Threat Assessment report classified Juggalos, ICP’s terrifically loyal fanbase best known for painting their faces like angry harlequins and spraying one another with sticky cola, “a criminal organization formed on the street” on par with the MS-13, Latin Kings, and the Aryan Brotherhood. This deeply researched and explosively informed government reportalso blew the lid off a major underground machination: Juggalos have not only infiltrated the U.S. Military (specifically the Army and the Air Force), but they use social networking “to communicate and expand”!

The FBI sure is good at investigating.

Before last fall, Juggalos had been regarded as a criminal enterprise in four states (Arizona, California, Pennsylvania, and Utah), but the FBI’s assessment has had more widespread repercussions. Earlier this year, one Albuquerque Juggalo ended up on New Mexico’s Most Wanted List after skipping probation, explicitly because of his ties to “the Insane Clown Posse ‘Juggalo’ gang.” At this year’s 13th annual Gathering of the Juggalos, the Department of Homeland Security showed up, though they didn’t enter the privately owned grounds. Worst of all, Alex Trebek was forced to acknowledge ICP‘s existence on Taxi TV.

“You’re trying to grow love in your country and shit,” Shaggy 2 Dope told me last month. “Then the head of your country—the FBI—just turns around and fucking kicks you in the nuts. How are you supposed to respond to that?”

With much clown love and a pile of fucking nut-kicking paperwork. On August 24, ICP’s legal team filed a Freedom of Information Act request demanding the FBI release whatever information led the organization to label Juggalos a gang. There’s been no response, so today, the band’s representatives filed suit against the FBI in the U.S. District Court for the Eastern District of Michigan “for its failure to produce any documentary evidence in support of the FBI’s classification of the groups’ fan base.”

Meanwhile, last month ICP’s label launched JuggalosFightBack.com, a site for fans to submit stories about how they’ve been unfairly treated by law enforcement. They’re still sorting through the 1000s of responses, trying to determine the best cases. The plan is for more suits to be filed.

“That’s the expectation,” confirmed Howard Hertz, ICP’s Michigan-based legal counsel, over the phone this afternoon. “This whole thing is absurd.”