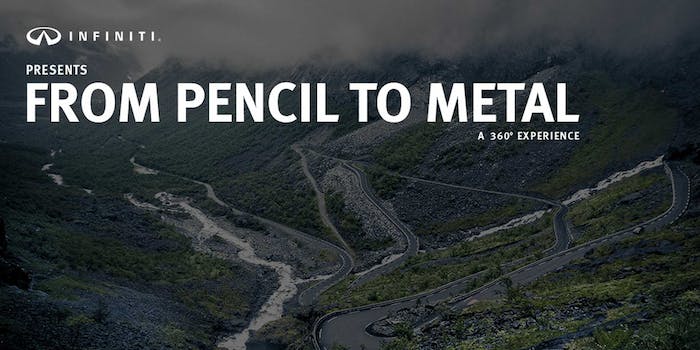 For the second of two innovative films that debuted at this year’s Pebble Beach Concours d’Elegance, Alfonso Albaisa, Infiniti‘s executive design director, takes viewers into the design process of the QX30 concept car.

“From Pencil to Metal” brings you into the studio to see initial sketches of the vehicle being scribbled in thin air, as the car is created around you. From CAD files to clay modeling to the impeccable finished product, the team at Infiniti has put the driver first, creating a virtual reality experience where the car takes shape around you—literally; thanks to YouTube‘s 360-degree video playback, users can look around the car as it comes to life.

“Traditional media can be one-sided, and seem to talk at consumers,” the team behind the project says. “But VR allows us to literally bring them inside of the Infiniti brand, an Infiniti car and an engaging story.”

YouTube’s 360-degree videos are playable on your desktop when using Chrome, Opera or Firefox;  when on your cellphone, you’ll need the latest version of the YouTube app.