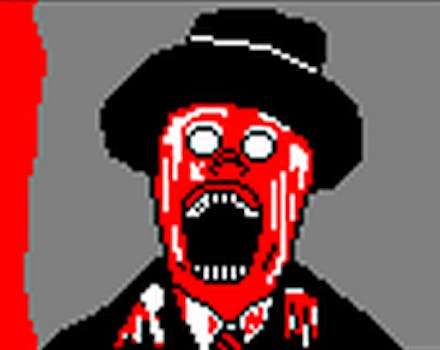 The surprising origin behind the epic Indiana Jones GIF

The 8-bit Indiana Jones movie is just the one in a treasure trove of GIFs created by PixelMash Theater.

Because pixels give Indiana Jones a new lease on life, especially when it’s the 8-bit-style firm compilations by the mysterious artists behind PixelMash Theater.

Yesterday, a long-circulating Imgur upload of this incredible GIF of the complete Raiders of the Lost Ark wended its way to Buzzfeed via Twitter. But what Buzzfeed didn’t realize was that there’s more where that one came from.

Archived on a Tripod website near you for posterity, the Indiana Jones GIF is just one of several amazing 8-bit theatre renditions of the storylines of great films, including Star Wars: A New Hope, Aliens, and Back to the Future.

The originator of the mini-masterpieces is a pixel artist named Folds Five, who designed the handful of films-on-pixel between 2005 and 2008. They have been steadily circulating the Internet ever since, but despite occasional talk of creating more, Folds Five has been quiet lately.

“I’m giving them a break for a while to be honest, or more to the point not pushing myself as hard as I used to,” Folds Five told Collider in a 2008 interview.

Intriguingly, there may be more GIFS lost to the deletions of time—Collider speaks of a missing Flash Gordon GIF, and Folds Five was working on a Matrix GIF at one point. Will this new viral round be enough to call him back to the challenge?

Tough to say, but if there’s one thing the Indiana Jones trilo—make that, quadrilogy has taught us, it’s this:

There’s always room for a comeback.