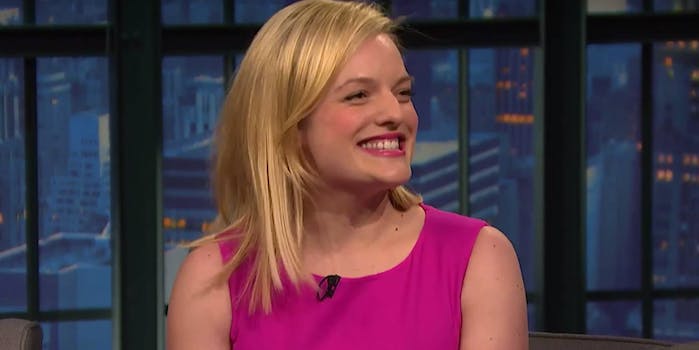 Hulu is adapting yet another book for series: Margaret Atwood’s The Handmaid’s Tale.

According to the Hollywood Reporter, Mad Men and Top of the Lake star Elisabeth Moss is set to play the role of Offred in the straight-to-series adaptation, with The 100‘s Bruce Miller writing the script and executive producing. Atwood will be a consulting producer.

Atwood’s 1985 novel—made into a 1990 movie starring Natasha Richardson and Faye Dunaway—imagines a bleak future in the Republic of Gilead, where the Constitution has been suspended and totalitarian rule is now in place. The rights of women have been stripped away and, due to low birth rates, fertile women are kept as handmaids whose sole purpose is to be a vessel for a child.

The story is told from Offred’s point of view, as she attempts to survive in a male-dominated, religious, fundamentalist society that has little regard for women’s freedom or agency. If that sounds a little too close to modern-day reality, it’s not lost on Atwood. In a statement, she said: “The Handmaid’s Tale is more relevant now than when it was written, and I am sure the series will be watched with great interest.”

The Handmaid’s Tale follows Stephen King adaptation 11.22.63 and original series The Path, as Hulu beefs up its drama offerings. The show is set to debut in 2017.