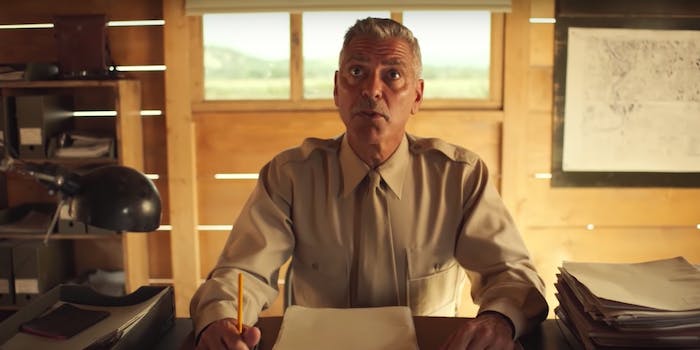 Widely recognized as an American masterpiece that depicts the horrors, errors, and morbid humor of war, Catch-22 unfolds in a non-linear fashion via third-person omniscient narrator. The show—written by Luke Davies and David Michôd and directed by George Clooney, Grant Heslov, and Ellen Kuras—instead tells the story primarily from Yossarian’s perspective, eschewing the absolute reliability of the book’s top-down, all-in approach.

Yossarian is a U.S. Army bombardier in World War II and something of an artful dodger, who is tired of countless strangers trying to kill him. Yossarian wants to be excused from combat, but if he does, he’ll be in direct violation of “Catch-22,” a corrupt precept specifying that concern for one’s wellbeing in the face of imminent danger is rational. A pilot could be considered insane if he willingly flies perilous combat missions, but asking out of duty would be evidence of sanity—making him eligible for the task he’s trying to shirk. It seems the only way out is more of the wanton violence Yossarian seeks to escape, which begets more violence.

The talented Abbott captures this desire and hopelessness to a tee. He spends most of the six-part series trying to get out of his missions, the number of which keeps rising thanks to his overzealous, self-aggrandizing, or outright hateful superiors, including Colonel Cathcart (Kyle Chandler) and General Scheisskopf (Clooney). Not helping matters is the fact that Yossarian previously slept with Scheisskopf’s wife. (“Scheisskopf” itself is an in-joke, translating to “shit-head” in German.)

The rest of the series hosts an interesting cast of characters, from the nefarious (Rafi Gavron as Aarfy), to the gullible (Austin Stowell as Nately), to the truly heroic (Graham Patrick Martin as Orr). One of the series’ (and book’s) best characters comes in the form of the absurdly ambitious Milo Minderbinder (Daniel David Stewart), who sees warfare as perhaps the greatest opportunity to make his personal fortune. It’s in these smaller characters, and the moderately unknown lead, that the series hits its marks. One excellent scene between Yossarian and Christopher Snowden (Harrison Osterfield), a rear gunner on his first mission, encapsulates the peak synergy between the series and the book.

The miniseries also maintains the novel’s black humor to an extent, though it unloads the jokes right away, as opposed to tying them together in subsequent chapters. The linear storytelling doesn’t quite capture the novel’s tone, but Abbott’s arresting performance supplies the series with necessary vitality. More importantly, this iteration of Catch-22 homes in on the trauma and irrationality of war, and the struggle to maintain any semblance of reason within its fog.