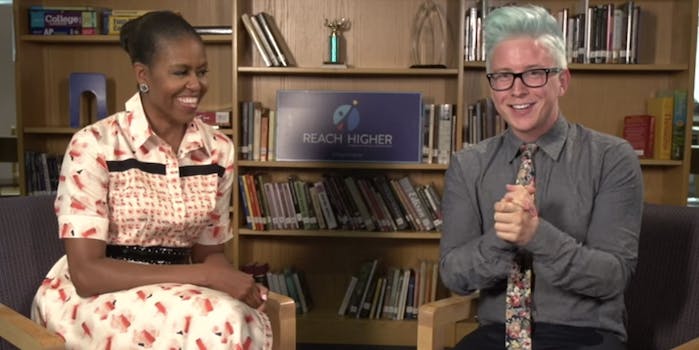 Web celebs get a seat at the White House Correspondents’ Dinner

How many collabs will be birthed between Congress and YouTubers?

News organizations are known for picking a hodgepodge of celebrities and barely celebrities to rub elbows at their tables during the annual White House Correspondents’ Dinner in D.C. each spring, but this year Arianna Huffington has broken with the tradition of at least including an Oscar-nominee or two, focusing her table on digital influencers instead.

“There’s a new power center,” Huffington told the Washington Post. “People whose names you might not have heard of have tremendous power—and we want to know them.”

Huffington might be positioning this as a grand new gesture, and it may be the first time so many digital stars are clumped together as guests, but mainstream media has been paying attention to digital heavyweight for some time now, and the same key stars tend to pop up on every short list as nominees, partners, or guests. Even the White House itself has already taken notice.

Of the digital set, Oakley has interacted with both President Obama and the First Lady before, and Mota interviewed Obama following his State of the Union address, alongside other YouTube powerhouses GloZell and Hank Green. That particular incident caused some frustration and outrage in advance of their interview, and then many news organizations acted surprised that digital content creators could do a good job making digital content with the president.

With each new step forward, are we fast approaching a time when digital influencers will just be called celebrities, no qualifier?