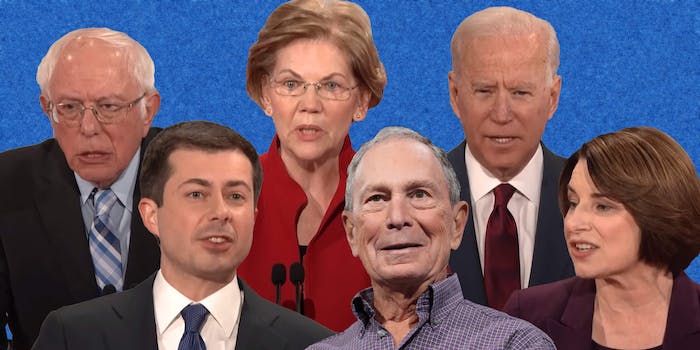 The ninth 2020 Democratic presidential debate will take place tonight in Nevada, just ahead of the state’s caucuses and the third time voters will choose who they want to take on President Donald Trump in the 2020 election.

Only six candidates will be taking the stage after New Hampshire’s primary and Iowa’s caucus winnowed the field down.

Here’s what you need to know about, and how to watch tonight’s 2020 Democratic presidential debate online.

What time is the Nevada 2020 Democratic debate?

The debate will begin at 8pm CT at the Paris Theater in Las Vegas. It is being hosted by NBC News and MSNBC.

Which candidates are in the Nevada debate?

Five candidates have qualified for the debate. They include:

There was speculation as to whether Bloomberg would be onstage for this debate–as the DNC relaxed the rules needed to qualify. On Tuesday, a poll showed him with 19% support, giving him enough support in the needed number of polls to make the stage.

This is the first time Bloomberg will appear onstage against his fellow 2020 hopefuls. It’s likely he will spar with Sanders, as the rhetoric between the two has picked up in recent days.

How to watch the Nevada 2020 Democratic presidential debate

The debate will be streamed on a number of different platforms.

NBCNews.com and MSNBC.com will live stream the debate, as will the NBC News mobile app, and the NBC News and MSNBC Facebook pages. The Nevada Independent is also live-streaming the debate.

A Spanish live stream will be on Telemundo’s Facebook page and its mobile app.

MSNBC is available on a handful of the popular streaming services.

For a more à la carte service, look to Sling TV. It offers two cable packages, Sling Orange and Sling Blue, both of which cost $30 per month. If you grab them both (Sling Orange + Blue) you can save $10 per month. Sling Blue offers more bang for your buck with over 40 channels, including sports necessities like FS1, NBCSN, and NFL Network. You’ll also gain access to the usual cable mainstays like Food Network, Discovery, Cartoon Network, SYFY, and FXX. To gain access to MSNBC, you need to spring for the $5 Sling Blue News Extra package. Here’s the complete guide to Sling TV channels.