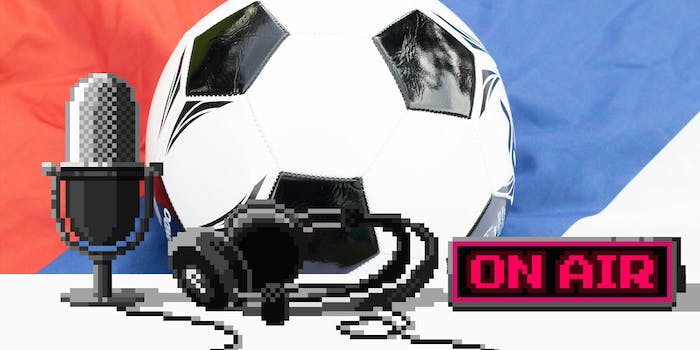 How to watch the World Cup online

This summer, the world stops turning. Will you tune in?

We know: Our boys in red, white, and blue almost ruined the fun. Panama leap-frogged the United States and claimed North America’s final World Cup berth in October. And just think, the poor suits at Fox spent $200 million to pry away the TV rights for Russia 2018, surely hoping the momentum for the United States Men’s National Team would swell like 2010 and 2014. But you’re going to love watching all the same. If not for the world-turning soccer, then because you can easily stream at the office. Here’s how to watch the World Cup online.

Here’s how to watch the World Cup online

In the U.S., Fox and Telemundo have the rights this time out. (Not ESPN and Univision.) That means all 64 games, taking place June 14 – July 15, are available via over-the-air TV for free—if you don’t mind a little Spanish.

In English, 38 games are on Fox, while the remaining 26 will be available on cable network Fox Sports. (Details below.)

The easiest way to watch is to log in to your cable or satellite provider via the Fox Sports app or the Telemundo app. Of course, many of us have already cut the cord. In this case, I recommend talking to your parents (only if they have a have satellite or cable subscription) and creating a login ID for their account. They won’t realize that you’re using it to, essentially, watch their cable content on your Apple TV.

If that option is off the table, DirectTV Now is where you want to start. The “Live a Little” bundle covers the ground you need. Ditto Sling TV‘s Blue tier. Fubo TV is another smart investment if you crave live sports. I’m a longtime subscriber as a soccer dork who needs his Bein Sports, and it’s a delightful menu of action with a strong user experience.

Who should Americans root for?

This is a long-running talking point on sports radio. I believe with all my heart that Mexico is the truest choice unless you’re highly tuned into your ancestry. They’re our neighbors and they’re under attack by racist scape-goating. I’d never vouch for fans of the Houston Rockets to support the Dallas Mavericks in the NBA Finals because of geography, but then again Mark Cuban isn’t separating the Houston Rockets from their children at the border.

Plus Mexico is one of the most supported teams in the U.S. It’s one of 13 reasons why you should watch the tournament, and we unpack it on this week’s bonus Upstream podcast. Give it a listen below:

Who is going to win the World Cup?

Spain has the depth and the tools. France and Belgium are loaded. Argentina looks ready to implode. Uruguay has the managerial consistency to make a run to the semis. But if it isn’t Germany or Brazil, then color me pickled.

In England, a “fixture” is basically a game. I know, that’s only slightly less confusing than every anglophile soccer podcast host using plural verbs to describe countries. (As in “Argentina are hoping to best Iceland.” Come on mates, this is America. I mean blimey that’s pretentious!)

Anyway, here are the games.