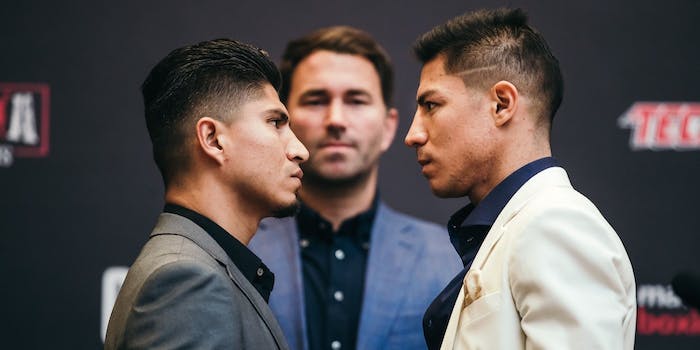 How to stream Mikey Garcia vs. Jessie Vargas

Can Garcia regain what he lost in his last fight?

Coming off the worst performance of his career in his most high-profile matchup, there are a few questions that surround Mikey Garcia as he makes the final preparations to fight Jessie Vargas in a Saturday night fight you can stream on DAZN.

Is Garcia really as elite as we thought? Can he turn himself into a legitimate welterweight when he’s spent all but one fight of his career in the lower weight classes? Did his last fight and first career loss leave a permanent mark on his psyche?

Garcia will attempt to answer those questions vs. Vargas, who isn’t  considered elite but does have a solid resume. Vargas,  meanwhile, will try to score by far the biggest victory of his career.

“He’s a tough fighter. He’s a fellow champion,” Garcia recently told the Daily Dot. “He fights hard. He’s naturally bigger than me. Those are the challenges he presents. He has a height and reach advantage. His weight is more naturally fitted to a welterweight. But I want to prove to everybody that I’m a welterweight too.”

Now, Garcia will get a second chance to make an impression on the rest of the 147-pound weight class. Here’s everything you need to know to watch Garcia vs. Vargas.

The only legal way to watch Garcia vs. Vargas in the U.S. is on DAZN. Since September 2018, the streaming service has shown some of the most important boxing matches in the sport. DAZN is in the middle of a $365 million contract with Canelo Alvarez, and it showed both Anthony Joshua vs. Andy Ruiz heavyweight championship bouts. Gennadiy Golovkin has fought on the service, and the exciting World Boxing Super Series tournament has been a mainstay. And don’t forget about KSI’s victory against Logan Paul and Jake Paul’s knockout of AnEsonGib in YouTube boxing extravaganzas.

Garcia vs. Vargas: Why it matters

In one of the most intriguing matchups of 2019, Garcia (39-1, 30 knockouts)—a former titlist at 126, 130, 135, and 140 pounds—moved up to welterweight to take on Errol Spence, one of the best fighters in the world. Observers thought Garcia would be too small for Spence, even if their boxing talent was similar. In the end, Garcia couldn’t do anything to bother Spence, who beat up Garcia and won by a unanimous shutout decision.

Though there was talk Garcia could return to the lower weight classes, he decided to stay at 147 pounds and challenge Vargas (29-2-2, 11 KOs).

“I know there’s a lot more I can show because of the way I performed in my training and sparring sessions,” Garcia said. “I’m sparring with bigger guys. There’s so much more I know I can deliver. I just couldn’t do that in my last fight. Spence fought the perfect fight. I just couldn’t get off. I felt tired and slow. When you have a hard night like that, what are you going to do? You have to keep working through it.”

Fortunately for Garcia, Vargas is not nearly as talented as Spence. Vargas, though, won’t be a pushover.

He scored his most impressive win when he knocked out Sadam Ali in 2016 to win a welterweight title, and though he’s lost to A-level fighters like Manny Pacquiao and Timothy Bradley, he has experience and has beaten plenty of B-level competition in the past several years.

“I definitely feel that I am in my prime now,” Vargas said, via Boxing Scene. “I feel good, solid, very experienced. I’ve gained plenty of knowledge
throughout the years, and I think that I am in the best time in my career
because of all that experience. Experience is what really makes a fighter.
Sometimes in a big fight, a lack of experience can affect you, but I am not in
that position. I’m good and everything is good on my side.”

The oddsmakers, though, have a different story to tell. As of this writing, Vargas is nearly a 4-1 underdog.