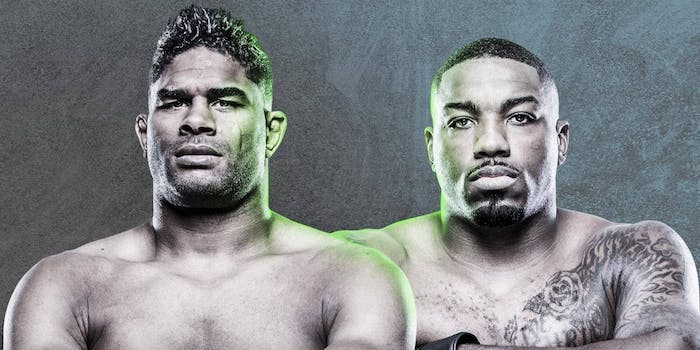 The success of an MMA fight can be measured in all kinds of ways—from its aesthetic beauty and displays of courage to the way it brings clarity to divisional rankings or pay-per-view dollars into a promoter’s pockets. And then there are those rare fights, like the one Saturday night between UFC heavyweights Alistair Overeem and Walt Harris, that are successes simply for existing. Regardless of what happens afterward, the moment they start, a victory has already been won.

The story of Saturday’s UFC Fight Night main event is one of tragedy piled on tragedy. Overeem, one of the last true MMA legends still active and viable, and Harris, a journeyman just starting to come into his own after nine up-and-down years in the sport, were originally scheduled to fight last December in Washington, D.C.

But in late October, news broke that Harris’ stepdaughter, Aniah Blanchard, had gone missing. On Nov. 1, not long after police announced they’d found evidence indicating foul play in Blanchard’s disappearance, Harris dropped out of the fight. Overeem ended up facing late replacement Jairzinho Rozenstruik in D.C., losing by knockout in the closing seconds of the fight just one week after police discovered Blanchard’s remains in a wooded area in Macon County, Alabama.

To the amazement of the MMA community, Harris agreed to come back to the cage to fight Overeem barely five months after his daughter’s murder. It’s hard to even fathom the idea, but no doubt he saw therapeutic value in getting back to work, especially since his work consists of harming other human beings. The main event fight at UFC Fight Night 172 on April 11 likely would have been one of those rare moments when life transcends sport, a moment for a broken man to find catharsis, and maybe even solace, through the all-consuming physical and psychological stresses of a fight.

But, because the cruelty of the universe knows no bounds, another, this time global, tragedy followed hard on Harris’ private one and wiped out the fighter’s return. On March 16, UFC Fight Night 172 was postponed after it became clear that full arenas wouldn’t fly in the age of COVID-19 and the UFC had to give up its quixotic quest to be the only sports promotion putting on events in the middle of a global-health meltdown.

The UFC restarted that quest again last weekend, of course, and as the promotion’s Week of Defiance in a Quiet Room comes to a close on Saturday, I remain as moody about it as I was when the week began. But I have to admit that moodiness is tempered by the desire to see Harris step back into life after nearly being crushed by it.

That Harris is returning to the world in the middle of a pandemic and by way of a sport that requires its athletes to brush up against death is poetic in its way. Morbid but poetic, and filled with the contradictions that make life life. MMA may have proven itself amoral this week but it’s still hard to argue against it as a venue for rebirth. From death springs life, and fighting will always have that intimate connection over every other sport. Damn MMA for making me love and hate something so much.

How to watch Overeem vs. Harris without cable

This UFC Fight Night in Jacksonville is being broadcast on ESPN+—the streaming service which, as of March 2019, signed a seven-year contract with the MMA organization to be the exclusive home of UFC PPV telecasts and a plethora of UFC Fight Night shows each year.

ESPN+ is a great way to stream all kinds of combat sports content. The service only costs $4.99 per month or $49.99 for the entire year. Given how much content you receive, that’s a really good deal (you can also cancel at any time).