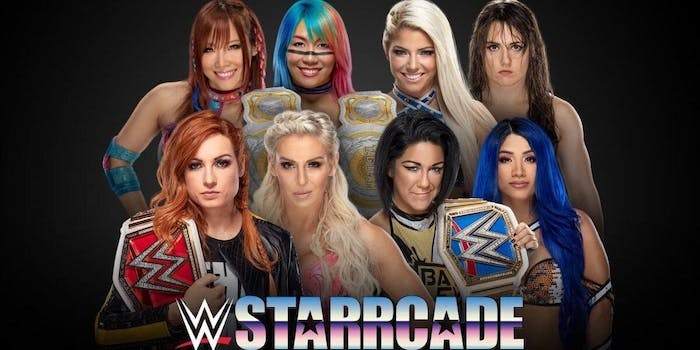 How to stream WWE’s Starrcade

End your Thanksgiving weekend with a bang.

Only a week after broadcasting Survivor Series on the WWE Network, the biggest wrestling company in the world is back with one of the classic PPV titles. Since 1983, Starrcade has been synonymous with Thanksgiving (or the Thanksgiving weekend). It started with Jim Crockett Promotions 36 years ago, and it transitioned to being an NWA and a WCW mainstay for the rest of the century.

None of those promotions no longer exist, and from 2001-16, Starrcade was relegated to wrestling history. But for the past three years, WWE has resurrected the PPV for late November, and this year, it features some solid starpower (though, to be fair, not nearly as much as Survivor Series).

Included on the televised version of the card are a fatal four-way for the WWE women’s tag team titles between defending champs The Kabuki Warriors vs. Becky Lynch (the Raw women’s champ) and Charlotte Flair vs. Bayley (the Smackdown women’s champ) and Sasha Banks vs. Alexa Bliss and Nikki Cross. Also, Rusev will face Bobby Lashley in a last man standing match, and Kevin Owens will interview Ric Flair.

Unfortunately for the viewers who can’t be in attendance at the show, they won’t get the chance to watch WWE Universal champ Bray Wyatt take on Braun Strowman in a steel cage  in the main event or Roman Reigns battle Barron Corbin. Those matches are for the house audience only.

Here’s everything you need to know to watch Starrcade if you don’t have cable.

WWE Survivor Series live stream: How to watch without cable

WWE Network is the best way to get the Starrcade live stream if you want to watch these wrestlers go nuts in the ring. If you’re not already a convert, the news is good: You can get a month of the service free right now, which means you can watch Sunday night’s show without paying a penny. After that, the service costs just $9.99 per month, but you can cancel anytime. Considering WWE Network lets you stream all 14 yearly pay-per-view events at no additional cost, that’s an incredible deal. Seriously, just think about how many times you’ve had to pay $60 to watch a single PPV. For that same amount, you’ll get a whole year of WWE Network—and access to all past events. Between NXT, RAW, and Smackdown Live you’ll be able to watch all your faves hit the mat on a weekly basis, and you’ll also get access to documentaries, reality programming, and original productions.