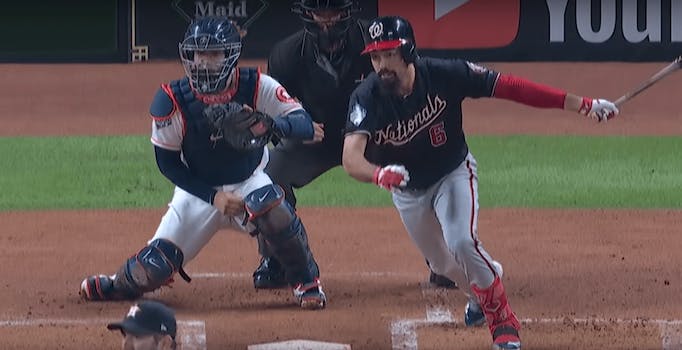 How to stream Game 7 of the World Series

The baseball world looks to Houston for the thrilling finale of what's been a gripping series.

Well, folks, it’s Game 7 of the World Series. The Houston Astros and Washington Nationals have chipped away at each other and the 2019 version of the fall classic has been defined by flurries of big-time hitting and… devastating cold spells. Shoot the Nats lost three straight at home only to come alive on Tuesday night and leave poor ‘Stros pitcher Jason Verlander again without a World Series win.

Tied at three games apiece, Wednesday’s showdown is for all the pride and glory.

It’s been a streaky, wonky saga. “Nats in 4!” was on Friday a rallying cry—surprising considering that the Astros were heavily favored only to begin the series by losing two straight—and then on Sunday night everyone booed the president.

Stephen Strasburg pitched like a legend, twice, for the Nationals, but Max Scherzer was abruptly unable to pitch Game 5 after crippling neck spasms. Houston is the home team tonight and you’d love that for their title chances except that neither home team has won a home game in the World Series.

For the Nats, Scherzer returns. For the Astros, it’ll be Zack Greinke. The rest is for the taking—who wants to be the hero?

As for catching the action live, here’s everything you need to know about streaming the World Series online.

Each service below offers a one-week free trial.

FuboTV was built from the ground up with sports fans in mind. There are different channel packages available whether you’re looking for baseball, basketball, soccer, golf, and even outdoor sports like rock climbing. But no worries, all the great cable channels you’re after are present too, including Viceland, Bravo, TBS, and IFC. Here’s the complete FuboTV channels list.

Hulu with Live TV is one of the most popular ways to stream live TV, perhaps because you gain access to a massive library of on-demand content including classic and current TV shows, movies, not to mention Hulu’s original programming. While you won’t gain access to the MLB network, you will gain access to venues to watch much of the MLB playoffs and the World Series. As far as live-streaming goes, you’ll have almost 60 channels to flip through, including HGTV, a full suite of ESPN channels, Cartoon Network, FX, and even deep cuts like Nat Geo Wild and Syfy. Here’s the complete list of Hulu Live TV channels.

But don’t get too attached! The service announced this week that it’s likely shuttering in 2020.

The app will allow you to live stream all of the games from FS1 and those airing on your local Fox affiliate, it unlocks all of the Fox channels that are available via your cable or live TV streaming package above, like FS2, Fox College Sports, and Fox Deportes. It’s an intuitive, fluid app, compatible with most streaming devices, and absolutely worth downloading as a backup plan.