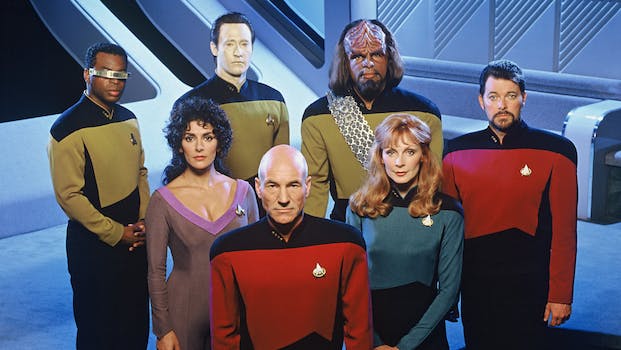 How to stream ‘Star Trek: The Next Generation’

The perfect way to scratch that Picard itch.

Space… the final frontier. These are the voyages, this is the continuing mission–yadda, yadda, yadda. Just about everyone in the Alpha Quadrant knows what Star Trek is, and among the nerdiest Trekkies, The Next Generation remains the series’ gold standard.

Captain Jean-Luc Picard is one of Starfleet’s finest, and the latest captain to helm the Federation flagship, the U.S.S. Enterprise. His loyal crew is comprised of talented officers, including Commander William Riker, Betazoid Deanna Troi, Noonien-Soong android Data, and Starfleet’s first Klingon officer, Worf. Together, the crew of the Enterprise seeks out new life and new civilizations, all while occasionally bumping heads with the Romulans, Klingons, and the Borg. It’s sci-fi television at its finest.

Here’s everything you need to know to watch Star Trek: The Next Generation.

Star Trek: The Next Generation cast

How many seasons of Star Trek: The Next Generation were there?

There were seven seasons of the show, which comprised 178 episodes. Star Trek: The Next Generation ran from 1987-1994. There are also four films featuring this cast.

How to watch Star Trek: The Next Generation online

If you want to watch episodes of Drunk History on the day after they air, there’s no better option than Hulu. The streaming service, which just slashed the cost of its ad-supported version to a mere $5.99 per month, offers all episodes of Star Trek: The Next Generation on-demand. If you subscribe to Hulu with Live TV, you’ll get the on-demand portion of Hulu included for free. You can also upgrade to Hulu No Commercials for $11.99 per month.

Amazon Prime Video is one of the most popular streaming services available, in large part because it comes complimentary with every Prime membership. If you’re addicted to two-day shipping and binging TV shows, it’s one of the best-streaming destinations. There are plenty of exclusives that make having access to the library worth having, including Good Omens, The Man in the High Castle, The Marvelous Mrs. Maisel, Transparent, and The Tick. This includes Star Trek: The Next Generation. Best of all, if you’re a student, you can get six months free before you commit for the rest of the year.

You can catch all seasons of Star Trek: The Next Generation, which offers a free month of service to new subscribers.