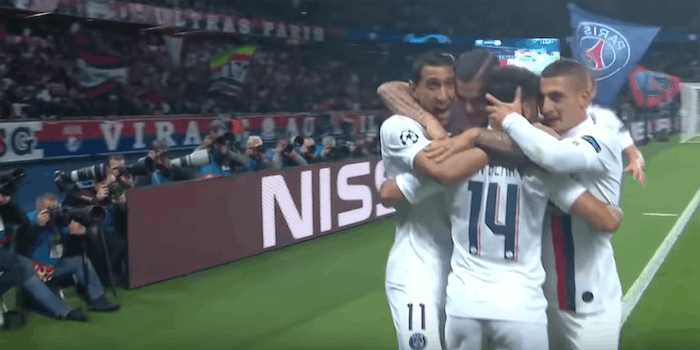 How to stream Real Madrid vs. PSG live

Real Madrid's got a major obstacle in way of winning its Champions League group.

PSG is in the driver’s seat for Champions League Group A, thanks to winning its first four matches. That included a 3-0 home win over perennial champs Real Madrid to open tournament play. Real will get its chance at revenge—and at putting itself in position to still possibly win the group—when the two European giants face off in the Bernabeu on Tuesday.

Here’s everything you need to know to live stream Real Madrid vs. PSG, including what to watch for on the pitch.

AT&T TV Now is a bonus for AT&T wireless customers, especially for those who happen to be soccer fans. It provides instant access to more than 45 channels, including local channels. That means TNT for Champions League, and NBC as well as NBCSN for Premier League action. It also means Fox as well as FS1 and FS2 for MLS, Bundesliga, the U.S. men’s and women’s teams, and even Liga MX offerings, and ESPN and ESPN2 for its array of soccer and other sports programming. It even offers free HBO on PLUS and MAX channel suites. Plus, it comes with CloudDVR for up to 20 hours of TV recording per month. One account works on two devices, but you can add more devices for only $5.

Real Madrid vs. PSG: What to watch for

Real Madrid’s a bit removed from its Champions League glory days of less than two years ago when it finished off a third straight Champions League title. In its post-Cristiano Ronaldo era, Real lost out to Ajax in the round of 16, and in its current position, it would face a group winner in that first phase of the knockout stages. In La Liga, it’s in a tight race with Barcelona, Sevilla, and Atletico Madrid, and although the squad pulled off a 3-1 win over Real Sociedad over the weekend, Barca also grabbed a win and maintains a lead in the standings on goal differential.

For Real to win the group, it would have to beat PSG, beat Club Brugge in the group stage finale, and then hope for Galatasaray—which has not yet managed a win in Group A—to upset PSG in Paris.

For PSG, getting to the knockout rounds in a good position isn’t the issue: It’s getting deep into the knockout rounds. Even with Neymar, Kylian Mbappe, and Edinson Cavani all in the lineup, PSG’s only gotten to the quarterfinal round all decade and would like to change that. Angel di Maria, who scored twice against Real, got on the scoresheet last Friday (along with new arrival Mauro Icardi) to keep an eight-point lead over Marseille in the Ligue 1 standings.