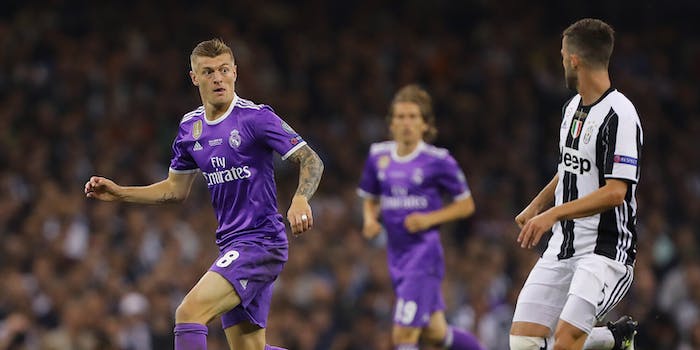 How to stream Real Madrid vs. Galatasaray live in Champions League

Real Madrid is locked with two other teams in a battle for second place in its Champions League group.

In Champions League play two weeks ago, Real Madrid outlasted Galatasaray 1-0 in Istanbul after the decisive goal was scored via Toni Kroos in the 18th minute. In this upcoming Champions League rematch on Wednesday, the teams face off in Madrid in what is a weirdly wide-open group in which PSG’s opened up a huge lead and the other three teams are scrambling for second place.

Here’s everything you need to know to live stream Real Madrid vs. Galatasaray, including what to watch for on the pitch.

Real Madrid vs. Galatasaray: What to watch for

Real got five different players involved in its waltz with Leganes over the weekend, to remain even with Barcelona (and Real Sociedad) on points in the La Liga standings, but it’s been much more challenging of a go in Champions League play. Through three matches, Los Blancos have lost to PSG 3-0, drew with Club Brugge, and then finally got over the hump with Galatasaray.

Galatasaray’s faring worse in Champions League, though; its only result was a scoreless draw against Club Brugge. In fact, the squad is yet to score a goal through three matches. One win over Real could upend the standings, though, and in taking a flyer on Radamel Falcao, Galatasaray’s shown it’s not afraid to roll the dice on veteran scorers.