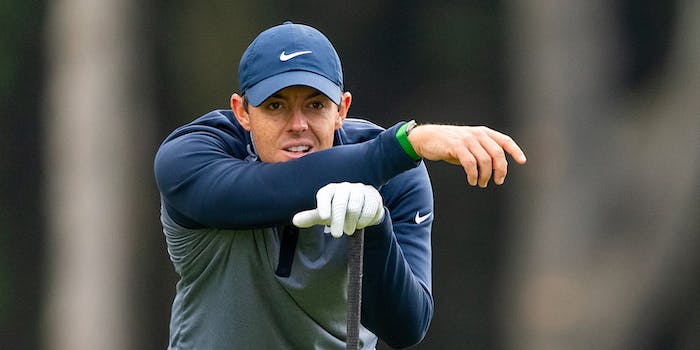 How to stream the Players Championship live

The Players Championship delivers four days of top-flight golf, and this year, they're promising every shot from every player.

Note: The Players Championship got in its first round Thursday, but its remaining rounds have been cancelled in accordance with the sports world’s response to the coronavirus pandemic.

Though Tiger Woods is missing this tournament with some back trouble, there are a number of top golfers playing in what’s known as the “fifth major” in golf circles, with defending champion Rory McIlroy looking like the top pick again this time around, but with Jon Rahm, Justin Thomas, and Bryson Dechambeau heading up the field.

The Players Championship is also a place for innovation in golf broadcasting, and 2020 is no exception. According to SportTechie, NBC will live stream every shot by every player throughout the tournament.

“NBC will stream more than 32,000 shots over 72 holes from a starting field of 144 golfers—all live—by utilizing nearly 120 cameras spread out across TPC Sawgrass,” the article noted. “There will be 24 live feeds (all individually produced on the fly), with each feed focusing on a specific group as they move throughout the course. This production will feature more than 747 hours of live coverage in four days.”

The tournament will be on the Golf Channel, NBC, and NBC Sports Gold; these streaming services provide fans the opportunity to catch Premier League action throughout the season.

If you’re a sports fan, however, it will appear tailor-made for you, starting with the Players Championship streaming. It also features NBC and NBCSN, FS1 and FS2, 10 beIN SPORTS channels for soccer and motorsports from around the globe, UniMás, and Champions League action via TNT all on tap. If you can’t watch a game, match, or round live, FuboTV offers a three-day replay for each match and 30 hours of cloud DVR. (Check out the complete FuboTV channels list.)

AT&T TV Now is a bonus for AT&T wireless customers, especially for those who happen to be sports fans. It provides instant access to more than 45 channels, including local channels. That means NBC as well as NBCSN for Premier League action, Fox as well as FS1 and FS2 for MLS, Bundesliga, the U.S. men’s and women’s teams, and even Liga MX offerings, ESPN and ESPN2 for its array of soccer and other sports programming, and the Golf Channel at the Xtra and Ultimate tiers if golf is a must. It even offers free HBO on PLUS and MAX channel suites. Plus, it comes with CloudDVR for up to 20 hours of TV recording per month. One account works on two devices, but you can add more devices for only $5.

YouTube TV is a great option for sports fans, including ESPN, ESPN2, ESPNU, FS1, FS2, the regional Fox Sports network for your area, as well as the Golf Channel, TNT, NBCSN for Premier League matches, and broadcasting partnerships with three MLS teams. (Take a look at the full list of YouTube TV channels here.)

If you want access to PGA Tour Live, and every shot in the Players Championship, you’ll want an NBC Sports Gold subscription. Subscriptions are $64.99 for the year, or if you just want to sample it for this tournament, it’s $9.99 for a month. NBC Sports Gold offers additional packages for fans who want to follow rugby action, Premier League soccer, Indy Car racing, cycling, and lacrosse.

According to the DraftKings Sportsbook oddsmakers (as of March 12), these were the favorites to win the Players Championship: