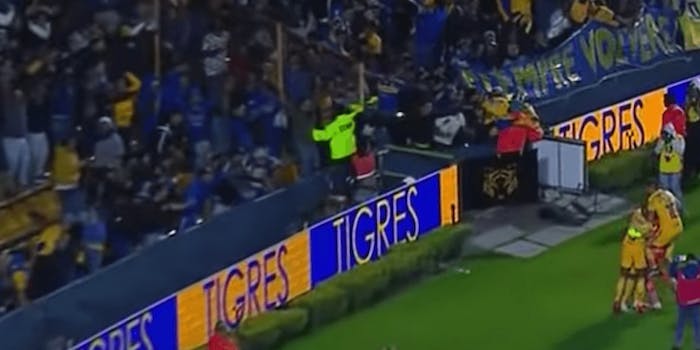 How to stream NYCFC vs. Tigres live

It's a marquee MLS vs. Liga MX match up in Concacaf Champions League.

Here’s everything you need to know to stream the Concacaf Champions League live on Wednesday.

NYCFC’s controversial debut in the Champions League continues on Wednesday, when City faces its toughest opponent yet, U.A.N.L. Tigres. NYCFC has been forced to play both home games in CCL at the home of the club’s arch-rival, Red Bull Arena, due to the unavailability of Yankee Stadium as the normal venue for the Bronx-based club.

Tigres were dominant last decade winning five Liga MX titles, but came away with zero CCLs in that time frame. The Monterrey-based club’s luck may be changing, though, as Tigres advanced over Alianza in the last round due to a stoppage time winner scored by Tigres’ goalkeeper Nahuel Guzmán on a corner kick.

The match is on TUDN; this streaming service provide fans the opportunity to catch Champions League action throughout the tournament.

For $5 a month, there’s a Deportes add-on that will get you TUDN and other Spanish-language sports channels, or the $86 Optimo Mas package (which has a number of English-language and Spanish-language favorites) will deliver TUDN your way.

NYCFC (last four matches: WWLL) looked ready for a run in the CCL Round of 16, scoring five in its first leg against San Carlos in Costa Rica, and securing a solid 1-0 win in the second leg. The New York club’s 2020 MLS start has not been as solid, though, losing 1-0 at Columbus in Week One after a third-minute Maxime Chanot red card, and 1-0 again at Toronto in Week Two, thanks to TFC rookie Ifunanyachi Achara’s debut MLS goal. City fans mostly boycotted their club’s previous game at RBA, drawing about 4,000 at a venue which sold out 25,000 for the two-time defending World Cup champion USWNT last week. Expect a much-fuller stadium against Tigres, with the embarrassment of playing in its rivals’ home stadium mostly worn off and a big performance needed to knock off one of the best teams in the entire region.

Tigres (last five matches: LLWWD) have found themselves with yet another opportunity to bring home CCL glory, being on the other side of the bracket that includes LAFC, Atlanta United, América and Cruz Azul. Tigres have the talent to beat anyone in the competition, but playing two of the three easiest teams left to reach the final is all the more reason to finally win their first CCL trophy. It would be a major disservice and insulting to GK Nahuel Guzmán to exit CCL now, who fulfilled the dreams of non-soccer players and goalkeepers everywhere, by scoring the winner in stoppage time of a knockout competition, after being brought out of his own net for a corner kick.