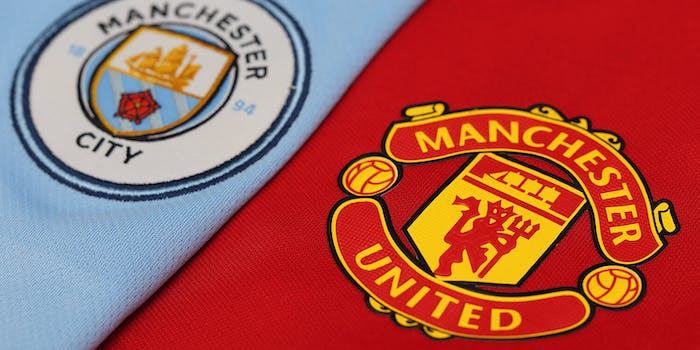 The Manchester Derby on Sunday will help determine Champions League places even if one team isn't allowed to play in it next year.

Here’s everything you need to know to stream Manchester United vs. Manchester City live in the Manchester Derby on Sunday.

It’s a proper Manchester Derby again! After a bit of a dip in form in the middle of the season, Manchester United’s risen to fifth in the table and will face second-place Manchester City in what could be instrumental to United’s Champions League chances for this year … especially if City’s ban from next year’s competition holds.

City is appealing the ban, though, and if nothing else, it can feel good about the League Cup win it got over Aston Villa last week. It’s the usual trophy City wins, but it’s better to win a trophy than none at all.

The Manchester Derby is on NBC and NBC Sports Gold; these streaming services provide fans the opportunity to catch Premier League action throughout the season.

Spanish-speaking viewers have quite a few options. For bilingual families, you might consider the Español: Best of Spanish TV package for either Sling Orange or Sling Blue for 24/7 specialty channel LaLiga TV and beIN SPORTS Connect: Channels 4-9, which features matches from La Liga, Ligue 1 and Copa del Rey, among others. Both packages cost $5 per month after your free trial. Sling TV Latino is another Spanish-language package for $10 per month, including NBC Universo, History en Español, and—of import to soccer fans—four BeIN Sports channels. (And choosing Best of Spanish + Sling Orange for $35 per month gives you access to ESPN Deportes.) For more information, check out our guide to Sling TV channels and our Sling TV review.

Manchester United (last five Premier League matches: LDWWD) found a beautiful Bruno Fernandes strike to overcome an early deficit to Everton. The 1-1 draw is now United’s fourth straight Premier League match with a result, which has gotten United from fifth to seventh and back to fifth in what has been a weird race below Liverpool in the standings.

Manchester City (last five Premier League matches: DWLWW) hasn’t played a Premier League match since its Feb. 22 1-0 win over Leicester. Last week, it beat Aston Villa 2-1 to win its third straight EFL Cup, with its scheduled match against Arsenal moved to Wednesday to create, between that and its upcoming Champions League showdown with Real Madrid, a congestion fixture.

According to the DraftKings Sportsbook oddsmakers (as of March 7):