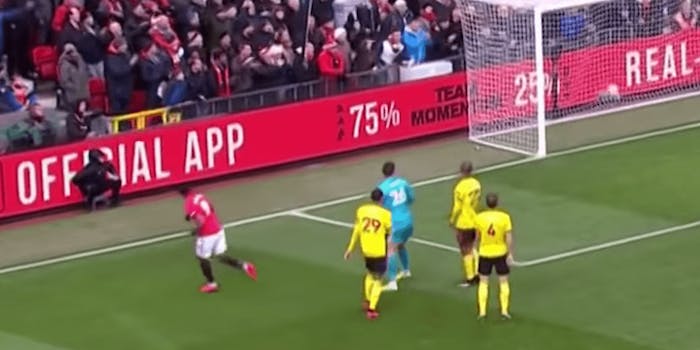 How to stream Manchester United vs. Everton live

Here's everything you need to know to stream Manchester United vs. Everton live on Sunday.

Here’s everything you need to know to stream Manchester United vs. Everton live on Sunday.

Manchester United travels to Liverpool to take on Everton at Goodison Park on Sunday. United has turned its form around since losing at Anfield last month, excluding the slip up at home against Burnley. Everton is similarly thinking about its derby with LFC, as a United victory in next week’s Manchester Derby would hand Liverpool the opportunity to win its long-awaited Premier League title at Goodison Park, just a few hours before St. Patrick’s Day.

Manchester United (last five league games: LLDWW) took care of business in the Premier League with a 3-0 win over Watford last week, which included a beautiful goal from Anthony Martial—a chip that you have to see to understand. While rolling over a relegation-bound team isn’t the best result ever, that goal in particular felt nostalgic for United fans who have not seen enough thrilling attacking play since Ole Gunnar Solskjaer took the job permanently. A victory in a tough environment over a legend like Carlo Ancelotti would give United supporters even more to be excited about, as well as gain further support for the embattled Norwegian manager.

Everton (last five league games: DDWWL) has successfully Everton’d once again this season. They fired their Plan A manager after a flailing start to the year, then succeeding in the Plan B of putting the club’s hopes in another savior and fighting out of the relegation zone. But there may be more to the story this time, as Man City’s Champions League ban means the club is only five points back of a UCL spot and three back of a Europa League berth. If Ancelotti can take Everton from the relegation zone to the European stage in less than a full year, he will have exceeded the immediate expectations for him from Merseyside’s Blues.