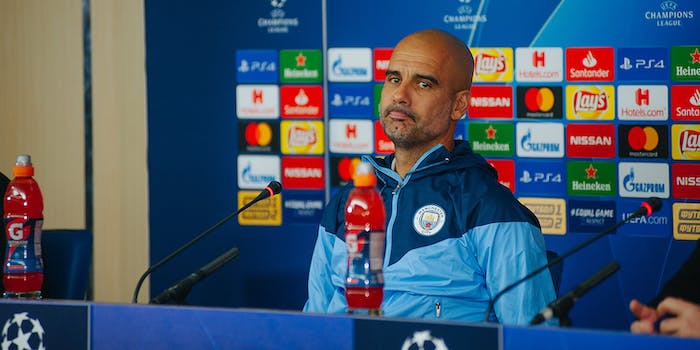 How to stream Manchester City vs. Leicester City

Under normal circumstances, this would be a major battle for Champions League positioning.

Here’s everything you need to know to stream Manchester City vs. Leicester City live on Saturday.

It’s been a bad week for Manchester City; the club learned on Feb. 14 that it’s been banned from Champions League play for two years under allegations of violating UEFA financial rules. Though the club will appeal the decision, and though manager Pep Guardiola is pledging to stick with the team, it’s created a great deal of unrest for a squad that’s still got a really good chance of winning this year’s Champions League.

Leicester City appears to be in good shape for Champions League play next year. It’s currently third in the Premier League, four points behind Man City but nine points ahead of fourth-place Chelsea. (And, needless to say, miles behind Liverpool just like everyone else.) A win over the Cityzens would obviously set the Foxes up for a possible run at second place.

Manchester City (last five Premier League matches: WDWLW) rebounded from its loss to Spurs with a 2-0 win over West Ham this past Wednesday. Kevin De Bruyne scored a goal and added an assist on Rodrigo’s opener to lead the way. Even as Man City’s looking to its challenge against Real Madrid on Wednesday in this year’s Champions League, it’s also looking to clear its name to allow it to participate next year. As Guardiola told the BBC following the West Ham win, “When someone believes they are right they have to fight.”

Leicester City (last five Premier League matches: LLWDD) is on a three-match unbeaten streak, getting its second straight draw on Valentine’s Day, going scoreless with Wolves. Though Jamie Vardy hasn’t added to his league-leading 17 goals since Dec. 21, he’s still a potent scorer and a big reason why the Foxes have had a successful season.