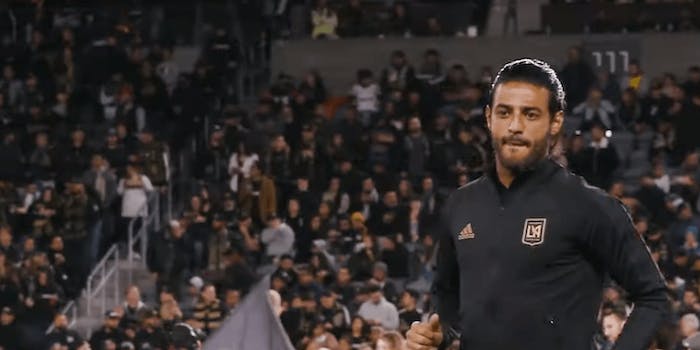 LAFC vs. Cruz Azul match postponed due to coronavirus pandemic

LAFC, looking like MLS's best hope in Concacaf Champions League, will need to wait to play due to the coronavirus-related suspension.

In response to concerns about the ongoing coronavirus pandemic, Concacaf has announced that its upcoming Concacaf Champions League matches, including the Thursday night match between LAFC and Cruz Azul in Los Angeles, is being postponed.

The suspension of the tournament was announced Thursday morning as part of a wave of sporting entities around the globe putting pauses on seasons and tournaments.

As Concacaf said in its official statement, “Given the developments last night, including new guidance issued by countries, cities, and states, we have made the decision to suspend the Scotiabank Concacaf Champions League with immediate effect. We are continuing to discuss arrangements for other upcoming Concacaf competitions and will make a further public statement in due course.”

This week’s other quarterfinal matches were played as scheduled, including Olimpia’s 2-1 win over the Montreal Impact, Club America’s 3-0 win over Atlanta United, and a 1-0 win by Tigres over NYCFC.

LAFC was to return on Thursday to take on first-place Liga MX club Cruz Azul, and the MLS club will have home-field advantage for the quarterfinal’s first leg. Head coach Bob Bradley and LAFC advanced in the CCL’s Round of 16 over another Mexican club, León, which was in first place (but has since slipped to second) when LAFC triumphed.

Cruz Azul, under manager Robert Siboldi, has risen to the top of the table on the back of five straight league wins, including a pair of 2-1 victories over Guadalajara on the road and Tigres at home.

The match is on Fox Sports 2 and TUDN; these streaming services provide fans the opportunity to catch Concacaf Champions League action throughout the tournament.

LAFC (last four matches: LWWD) played out an extraordinary 3-3 draw with Philadelphia Union on Sunday, with a Carlos Vela free kick not even being the best set piece taken in the game. It may have been two points dropped for LAFC, but the third-year club still has plenty of momentum after eliminating León in the first round. Along with setting a MLS all-time record of 72 points in a season in the club’s second year, this gives LAFC confidence throughout the organization it can compete with any team throughout the region. If Vela, Diego Rossi, and Brian Rodriguez can replicate their León performance at home against Cruz Azul, it will prove it.

Cruz Azul (last five games: WWWWW) has scored 15 goals over this five-game winning streak, with Johnathan Rodríguez and Mexico U-23 phenom Roberto Alvarado among the frequent goal scorers. Alvarado has tallied two goals and five assists already this Clausura, and has earned himself a call-up to the El Tri roster as an attacking midfielder for Olympic qualification, where it’s in a group with Costa Rica, Dominican Republic, and the United States. Alvarado will be critical in attack and defensively in the first leg, as a likely matchup against LAFC U-23 Ecuadorian defensive midfielder Eduard Atuesta will help determine how well the MLS club can implement its pattern of possession, and control the game.

According to the DraftKings Sportsbook oddsmakers (as of March 11):