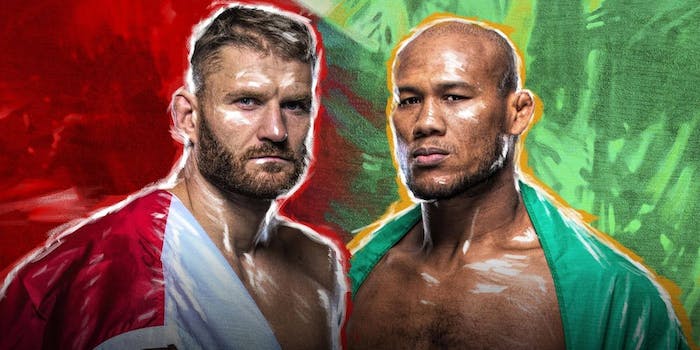 How to stream Jan Blachowicz vs. Ronaldo ‘Jacare’ Souza on UFC Fight Night

Souza is moving up in weight. Blacowicz is ready for him.

Aging is a curse, and particularly so for professional mixed martial artists. For fighters the inevitable encroachment of middle age, accumulation of injuries, and slowing of reﬂexes are accompanied by the sobering realization that their bodies can no longer cut 20 or 25 pounds in the week before a ﬁght and that the last years of their careers will have to be spent fighting larger, stronger, more terrifying people.

This reality looks particularly cruel for Brazilian middleweight veteran Ronaldo “Jacare” Souza, (26-7-1), who takes on Jan Blachowicz (24-8) Saturday on DAZN in his light heavyweight debut. Just a month away from 40 and coming off a humbling loss to up-and-coming middleweight Jack Hermansson in April, Souza is making his move from 185 to 205 pounds under a cloud. In the past few months, he’s watched two of his fellow aging former middleweight greats—men whose company he shared at the top of the division for years—move up in weight and get crushed for their trouble.

Last month, former middleweight champion Chris Weidman didn’t last two minutes before getting brutally knocked out by Dominick Reyes, and three months before that, the man who took Weidman’s title in 2015, Luke Rockhold, was beaten so badly by Blachowicz in his light heavyweight debut that he’s been mulling retirement ever since. Seeing two men you’ve held yourself up against for a decade get smashed to pieces can’t be good for a fighter’s confidence or his soul. Yet here’s Jacare making the move to 205 pounds, and daring to do so against a mountain of a man like Blachowicz.

There’s something cruel about the way the UFC is handling these recent late-career moves from middleweight to light heavyweight. One would think the promotion would reward veterans like Weidman, Rockhold, and Souza for their years of service with an easy ﬁght or two in their new weight class, but no such luck. One by one, the kings of the middleweight division are being thrown to the lions, and one by one they’re getting swallowed whole.

Which is proving to be a windfall for Blachowicz, who’s carving out a nice little niche for himself as the light heavyweight greeter of aging middleweights. In a division full of questionable contenders struggling to differentiate themselves and to earn a chance at champion Jon Jones, Blachowicz is playing things smart: making his case for a title shot by taking on big names in relatively low-risk fights. While others plead their cases on Twitter and risk their lives against men their own size, Blachowicz has found a safer way to move up the ladder.

Here’s everything you need to know to stream Blachowicz vs. Souza.

How to watch Blachowicz vs. Souza without cable

UFC Fight Night 164 in Brazil is being broadcast on ESPN+—the streaming service which, as of March 2019, signed a seven-year deal with the MMA organization to be the only home of UFC PPV telecasts and nearly two dozen UFC Fight Nights each year.

ESPN+ is a fantastic way to stream all kinds of combat sports content. ESPN+ has halted its free one-month trial, but the service only costs $4.99 per month or $49.99 for the entire year. Given how much content you receive, that’s a really good deal (you’re also allowed to cancel at any time).

Subscribers can watch the entire 30 for 30 catalog on demand, for example, as well as Top Rank boxing cards, daily MLB games, every out-of-market MLS game, international soccer, Grand Slam tennis, and thousands of college sporting events. ESPN+ works as an extension of the main ESPN app. The ESPN+ exclusive content is designated by the “E+” logo in the corner of the preview tile.