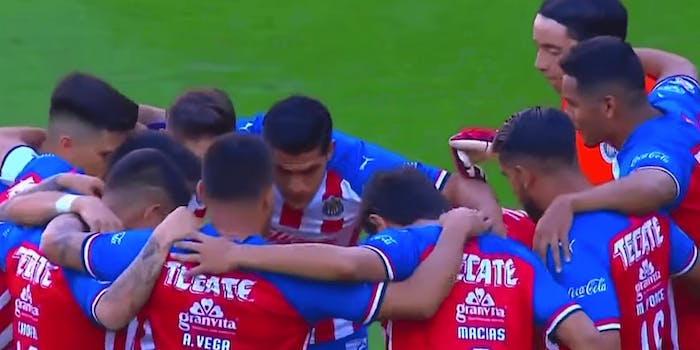 How to stream Guadalajara vs. Monterrey live

Two of the biggest names in Mexican soccer square off in one of the few global leagues active right now.

Here’s everything you need to know to stream Guadalajara vs. Monterrey live on Saturday.

Chivas de Guadalajara return home this weekend after a Clásico Tapatío win, and will be hosting defending Apertura champion and current 18th-place club Monterrey. Guadalajara has risen to fifth in the table at the halfway point, with three straight wins and a matchup with the league’s final winless team. Monterrey has completely fallen apart since its Club World Cup appearance and Liguilla victory over América, with four draws and five losses since the new year. The Rayados are 10 points back of the playoff line with nine games to go.

The match is on Chivas TV; this streaming service provides Chivas fans the opportunity to catch Chivas games and behind-the-scenes coverage throughout the season. Guadalajara was unable to find a US broadcaster for Chivas home games in Clausura 2020, so all the club’s home games in Liga MX can be watched on its own streaming service Chivas TV, including the Súper Clásico on April 19th at Estadio Akron against Club América.

Chivas TV is the club’s own streaming service, allowing streamers to watch all men’s home games and access exclusive content and interviews with players and staff for Chivas’ men’s, women’s and youth teams. The service is priced at $6.99 per month for a single package.

The club reached an exclusive broadcast deal in the USA to show all home games in Clausura 2020 on Chivas TV.

The Súper Clásico this season will be held in Guadalajara, which means soccer fans of all clubs should look into the service to watch one of the biggest games in the Americas.

Guadalajara (last five Liga MX games: LLWWW), under manager Luis Fernando Tena, has turned its season around with three straight wins. It’s now just two points behind third-place América and four points behind league-leading Cruz Azul. Mexican center forward José Macías scored last week in the Clásico Tapatío and headlined Mexico’s Concacaf Olympic Qualifying roster, which was to be hosted in Guadalajara, before the tournament was suspended due to COVID-19. Macías is the star of a young and promising roster, and is an expected starter against a Rayados defense with problems all over the field.

Monterrey (last five Liga MX games: LDLLD) has been so bad in 2020, that head coach Antonio Mohamed would have to perform a miracle to get this team into the playoffs in May. This is still a deep squad, with talented players at the top of it, but it’s been unexpectedly hurt by the departure of Rodolfo Pizzaro to Inter Miami in January. At ten points back with half of its games played, Monterrey’s only hope is to get a win and keep stacking wins, so the team has a chance to sneak into the eight spot (which worked out well last time, actually) in the final two weeks of the season.

According to DraftKings Sportsbook, as of March 13: