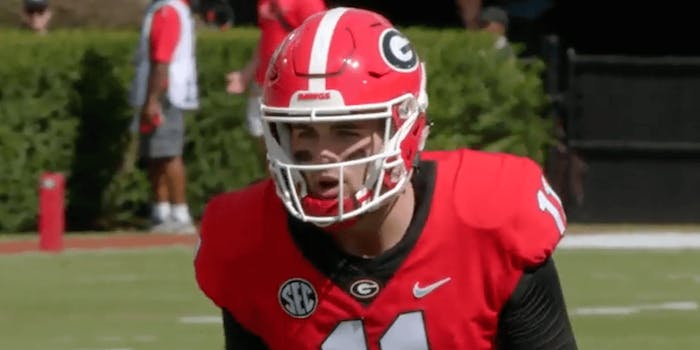 How to stream Georgia vs. Florida

Can Georgia overcome the powerful Florida defense to get back into the College Football Playoff picture?

No. 8 Georgia travels to Jacksonville to take part in one of college football’s greatest annual traditions this Saturday, in their border war versus No. 6 Florida at TIAA Bank Field.

Georgia (6-1, 3-1 SEC) desperately wants back in the College Football Playoff race. Florida (7-1, 4-1 SEC) has the inside track though, and would tee themselves up nicely for a potential CFB berth of their own with a win, given their lone loss was against LSU, now the best team in the country.

Quarterback Jake Fromm has been asked to do much more than make excellent decisions with the football, and has thrown for 1,406 yards as well as nine touchdowns and three interceptions.  Running D’Andre Swift has been explosive, carrying the rock 110 times for 752 yards and seven touchdowns. Georgia puts up 36 points per game and has averaged 471 total yards per game, mostly predicated on the run game with Swift and backfield co-star Brian Herrien. Georgia’s defense gives up just 10.6 points and 266.7 total yards per game.

The Gators picked up a win two weeks ago over South Carolina, which handed Georgia its only loss, downing the Gamecocks 38-27. Florida QB Kyle Trask threw a career-high four touchdowns, on 21 of 33 passing attempts for 200 yards. Florida RB Dameon Pierce ran seven times for 87 yards and a score. However, Florida’s injury-riddled defense allowed 387 yards, including 217 rushing yards.

The good news for the Gators–and bad news for the Bulldogs–is that defensive linemen Jonathan Greenard and Jabari Zuniga appear to be ready to go, though they’re still on the injury report as “probable” participants. Pierce is questionable with a concussion.

How to stream No. 8 Georgia vs. No. 6 Florida live: Watch SEC football

FuboTV is a solid TV streaming service option, whether your tastes run to entertainment (AMC, Syfy, FX), news (MSNBC, CNN), or sports (NBA TV, NFL Network). If you’re a soccer fan, it will appear tailor-made for you, with all Champions League matches (via the TNT and TUDN family of channels), NBC and NBCSN, 10 beIN SPORTS channels, FS1 and FS2. If you can’t watch a match live, FuboTV offers a three-day replay for each match and 30 hours of cloud DVR. (Check out the complete FuboTV channels list.)

Georgia vs. Florida: What to watch for

Carrying a mountain of momentum, head coach Dan Mullen and his Florida Gators seem to be on the ascent, rebounding from their LSU loss, with their defenders on the mend.

Georgia, meanwhile, sits in an interesting place as a team and a program. This was the year they were supposed to break through, but the loss versus South Carolina has hurt their chances for a CFB berth. The win over Notre Dame won’t be seen as a schedule strengthener, given how the Irish have looked coming into the second half of the season. This edition of their celebrated border war is a must win for both teams, as neither can afford another loss, but it feels like the Bulldogs need a win to continue to build on more than just this season.

At a neutral site, Georgia is currently a 4.5-point favorite, according to Odds Shark. Expect a low scoring matchup that could get sloppy should rain pay Jacksonville a visit.