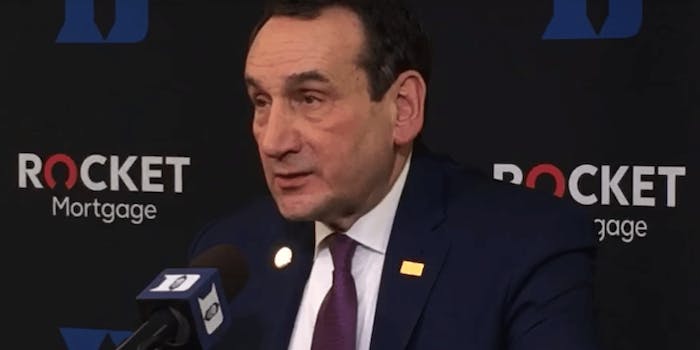 How to stream Duke vs. Virginia Tech live

Duke is looking to seal up a No. 1 seed, whereas Virginia Tech's looking for a way into the tournament.

Here’s everything you need to know to stream Duke vs. Virginia Tech live on Saturday.

Coach Krzyzewski and the Duke Blue Devils will need to regroup after their 22-point shellacking against NC State, so they can take on the Virginia Tech Hokies Saturday night in their continued pursuit of a No. 1 seed in the NCAA tournament.

The Hokies have their own tramautic loss to recover from, a 102-95 triple-overtime heartbreaker to the Miami Hurricanes on Wednesday. Duke has no ranked opponents left on its regular-season schedule, and any further slip-ups will do serious harm to the Blue Devils’ tournament stock.

Duke (last five ACC games: LWWWW) got thoroughly outplayed last week by a bubble team that will probably be playing in a play-in game come March, if not the NIT. It is certainly an anomaly for a Coach K team, which should have given him more than enough bulletin board material in practice this week. Expect a bounce-back performance from the blue bloods, and anything other than that could start to raise some serious questions about this team’s viability in the NCAA tourney.

Virginia Tech (last five ACC games: LWLLL) hasn’t got many hopes for the Madness this year, and is very much on the outside looking in. Any sort of win over Duke would catapult them right into the bubble conversation, but that, of course, is much easier said than done. Anything short of a win this weekend means the Hokies’ chances are slim to none, leaving all their hopes on winning four games in as many days to secure the ACC’s automatic tournament berth.