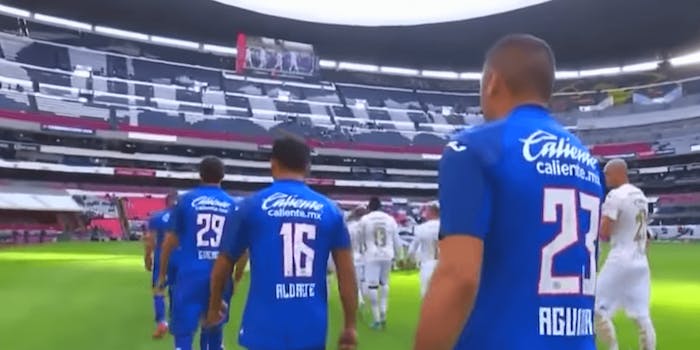 How to stream Cruz Azul vs. Tigres live

Both teams are checking in for this match between Concacaf Champions League legs.

Here’s everything you need to know to stream Cruz Azul vs. Tigres live on Saturday.

Cruz Azul hosts UANL Tigres on Saturday after both Mexican giants had somewhat of a mixed bag in Concacaf Champions League this week. Cruz Azul trailed for nearly the entire game in Jamaica against Portmore United, before getting two late goals—one in the ninth minute of stoppage time— to turn it around and all but assure it of advancing.

Tigres, on the other hand, struggled in CCL as they have all to often, blowing a 1-0 halftime lead in San Salvador to lose 2-1 to Alianza FC. This clash comes in between two sets of games that both clubs are prioritizing, so this match has potential for lots of goals.

The match is on FuboTV; this streaming service provides fans the opportunity to catch Liga MX action throughout the season.

Cruz Azul (last five league games: WWDWL) is on the right side of the playoff line this season, as manager Robert Siboldi has his squad two points clear after missing Liguilla by four points during the Apertura. Cruz Azul picked up a vital win in the league last time out, when it went into Estadio Akron and beat Guadalajara 2-1.

El Tri U-23 prospect Roberto Alvarado has impressed, notching four assists in his six games so far. If he can maintain his current form, it spells great things for both Cruz Azul’s Liguilla hopes and Mexico’s chance at making some noise at the 2020 Olympics in Tokyo.

Tigres (last five league games: LWLWL) have used the $8 million for Lucas Zelarayan’s sale to Columbus Crew to fill out their starting lineup, signing Nicolas López in the much-needed right winger slot. The Uruguayan striker is at the front end of his prime, and will help compliment the veteran forward line for UANL, which includes Javier Aquino, Eduardo Vargas, Enner Valencia and, of course, André-Pierre Gignac.

The French World Cup veteran has four goals in five games, but with the rest of Tigres combining for just two goals, the northern powerhouse is in an unfamiliar mid-table position. A win at Azteca on Saturday night would soothe Tigres’ fans worries a bit, as well as bring them level on points with Cruz Azul in 6th.

Cruz Azul is the home favorite on Saturday night at +120, with a tie at +210 and a Tigres win at +245, according to DraftKings Sportsbook.