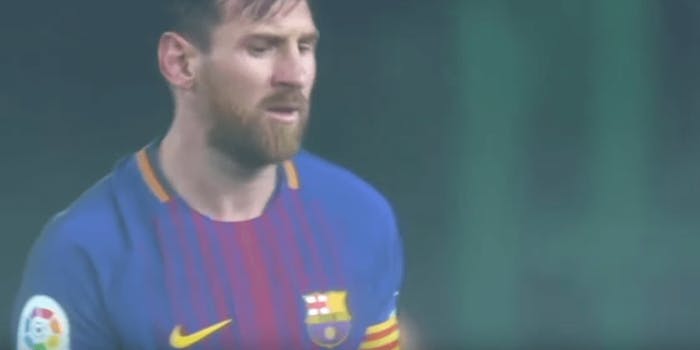 How to stream Barcelona vs. Real Sociedad live

Barcelona lost last week's El Clasico, but it still can win the La Liga title. It just can't do it all on its own.

Here’s everything you need to know to stream Barcelona vs. Real Sociedad live on Saturday.

Barcelona returns home after its 2-0 Clásico defeat last Sunday, and hosts Real Sociedad at home this weekend. The defeat in Madrid leaves Quique Setien’s team one point behind Real in second place, with 12 games left in this season after the second Clásico. Real Sociedad advanced to the Copa del Rey Final over Mirandes this week, with a 1-0 win on the road for an aggregate of 3-1. Real Sociedad will face off with rival Athletic Bilbao in the Copa del Rey Final on April 18, in the first edition of the Basque derby being played as a cup final.

If you’re a soccer fan, however, it will appear tailor-made for you, with NBC and NBCSN for Premier League matches, 10 beIN SPORTS channels for La Liga and Ligue 1. FS1, FS2, UniMás, and Champions League action via TNT all on tap. If you can’t watch a match live, FuboTV offers a three-day replay for each match and 30 hours of cloud DVR. (Check out the complete FuboTV channels list.)

Barcelona (last five league games: WWWWL) has lost all margin for error in the title race, and now with 12 games left, these three points need to be secured professionally. Performance reviews of how Barca attacks in Setien’s first season can be done in the summer, and he will make it to the summer as long as he keeps pace with Zidane and Real Madrid in the title race. If Messi and Co. can’t bounce back and get a win against Sociedad on Saturday, then the title race in Spain may be over.

Real Sociedad (last five league games: WLWWW) has already seen success this season, just two points off the Champions League spots (with one game in hand) and a spot secured in the 2020 Copa del Rey Final. A win over Bilbao in the Final would be the fifth major trophy for Real Sociedad, and the club’s first since winning Copa del Rey in 1986-1987. Qualification for the UCL could arguably be more beneficial to the club, and a win at Camp Nou would give Sociedad both the points and the confidence to finish in fourth place this May.