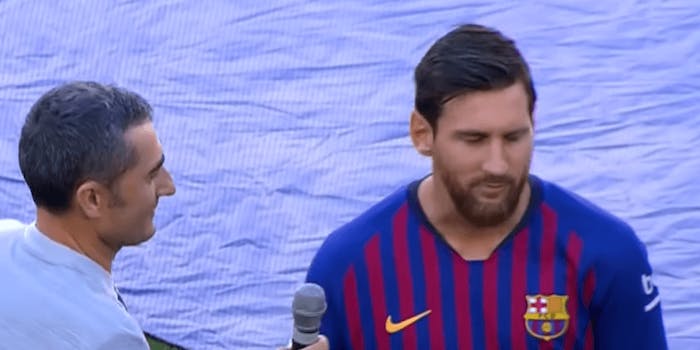 How to stream Barcelona vs. Leganes live

Bottom of the table Leganes have a tough matchup Saturday, when they play host to league leaders and defending La Liga champion Barcelona. Leganes pulled off the upset at the beginning of the 2018-19 season when they beat Barca 2-1 at home, and a similar result here could kickstart a great escape from the relegation zone.

Here’s everything you need to know to live stream Leganes vs. Barcelona, including what to watch for on the pitch.

Barcelona (Form: WDLWW) is three weeks removed from its shocking 3-1 loss to Levante. Since then, a Champions League home draw with Slavia Prague and a subsequent win over Celta Vigo has somewhat steadied the ship for the Catalans. With a big UCL matchup with Dortmund and an away trip to Atletico Madrid looming large in the next week, Ernesto Valverde will need to make sure his team is focused on getting the three points this weekend, because a slip up to a bottom feeder could send the club into a crisis.

Leganes (Form: DLLWL) couldn’t have started 2019-20 much worse, with just one win in 13 game. It’s currently dead last in La Liga, seven points from safety. There aren’t many logical arguments to make for the hosts on Saturday, except for the fact that the last time Barca visited Estadio Municipal de Butarque, Leganes pulled off the 2-1 upset.