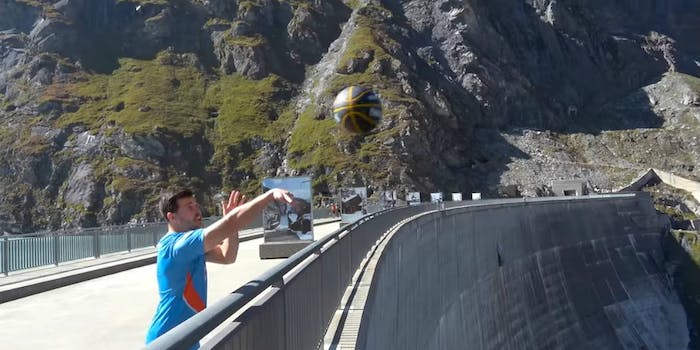 The team had to travel to Switzerland to make it happen.

Seventeen months ago, the Australian trick shot team How Ridiculous set a world record by making a basketball shot from a height of 415 feet. In a video released Sunday, the How Ridiculous team made that trick shot from 2015 look as easy as dunking on an 8-foot rim.

That’s because How Ridiculous has set a new Guinness World Record for draining a basket from 593 feet up in the air. That’s basically the equivalent of two football fields laid back to back, and in order to make that to happen, the team had to travel to Switzerland to take its attempt from the top of the Mauvoisin Dam.

And in just its third attempt, How Ridiculous did this to beat the Guinness mark that had been set at 533 feet by Dude Perfect last May.

“It was a surreal moment nailing it on the third shot,” Derek Herron, the one to take the shot, told the Guinness World Record website. “I watched the ball head towards the rim and saw the net move but still had my doubts that it went in until I saw Scott [Gaunson] going crazy.”

The entire scenery of the Swiss Alps is glorious. The ball falling through the hoop from that height is somehow even more impressive.