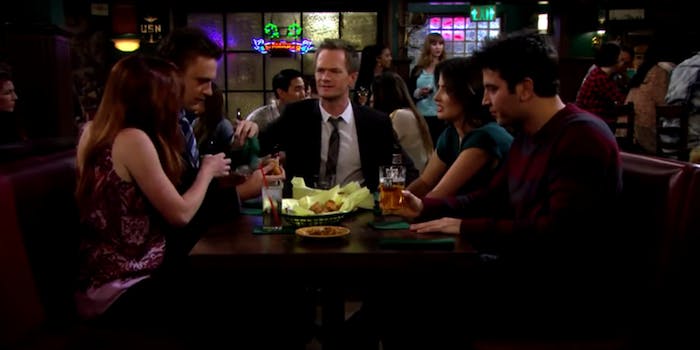 Just because it’s a fictional show doesn’t mean it has no bearing on the real world, or our cultural consciousness.

On Monday night, an episode of How I Met Your Mother aired, called “Slapsgiving 3.” The title references a long-running joke about a slap bet on the show, but this episode’s storyline also included three of the show’s main characters playing “masters,” dressed in stereotypical, outdated Asian clothing.

Dear @CBS, this is yellowface. My race is not a costume. #HowIMetYourRacism pic.twitter.com/dr6dQUwbzC

The thing that gets me about this: a WHOLE LOT OF PEOPLE had to not just say “okay,” but agree this was a GOOD IDEA. @CBS #HowIMetYourRacism

let’s be honest, this isn’t the first blatantly racist thing in the show. Remember when Ted mocked an azn student’s name? #HowIMetYourRacism

Showed some students a clip of HIMYM, without comment or context. They were immediately uncomfortable with it. #HowIMetYourRacism

People on #HowIMetYourRacism telling PoC to “relax” because apparently the show makes fun of Canadians all the time.

If you’ve ever watched an episode of HIMYM, you might have noticed that the women in the show are often relegated to wives, girlfriends, or sexual conquests, and the men participate in the usual unfunny, crass jokes we see on much of mainstream prime-time television. HIMYM’s sexism, racism, and transphobia aren’t often noticed within the affable, laugh-tracked plot line, but a closer reading reveals some troubling tropes.

This blog from last year breaks down how the show often makes jokes at the expense of trans people, and employs the outdated and offensive term “tranny.” Writer Aimee McFarlane addressed this cognitive dissonance today, and other instances of racism on the show. She also noted how activism and protest on Twitter can be a galvanizing force:

“After taking part in #HowIMetYourRacism, I’m feeling more hopeful for hashtag activism. Instead of being met by hoards of HIMYM fans telling me to shut up, I was met by other Asian Americans, (and our allies) who were equally disturbed.”

Yes, other shows throughout history have engaged in this same lazy stereotyping—remember this episode of Sex and the City?—but because social media plays such a big part in HIMYM’s fandom, it’s also a force for calling out.

It’s interesting that Lena Dunham was called out so quickly for not featuring any people of color on Girls, but HIMYM has been on for nearly 10 years and continues to indulge these lazy stereotypes while having no people of color in their main cast. When the Seth MacFarlane–produced show Dads debuted last fall, the (male) writers dove right into offensive Asian stereotypes, as well as some sexism for good measure, in the pilot episode. People were outraged, but Fox rejected a rewrite.

Of course, there were those who didn’t understand why people couldn’t just take a “joke.” The series finally ends March 31, but just because it’s a fictional show doesn’t mean it has no bearing on the real world, or our cultural consciousness. What’s more troubling is that the writers’ and producers’ casual racism-for-laughs has been allowed to pass for entertainment for so long.