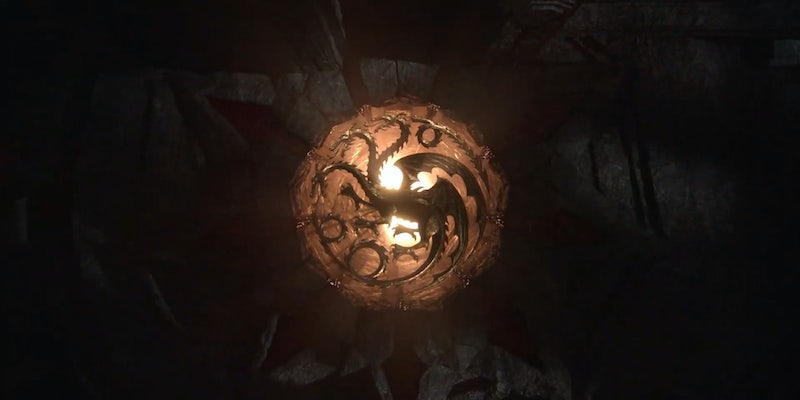 House of the Dragon/HBO Max

The ‘House of the Dragon’ theme music is repeating itself

Like its predecessor, the title sequence takes viewers on something of a journey.

If you had doubts that, after the divisive end to Game of Thrones, people wouldn’t tune into the Targaryen-centric House of the Dragon, you can probably put those to rest for now. On top of being an absolute ratings hit for HBO, I thoroughly enjoyed what I’ve seen so far, which I think gets stronger as it gets further into the season. Add in the obsessive deep-dives and introductions, the early character stanning, the fictional family tree dissection, the wig analysis, the larger discussions, and memes galore that’s overtaken my Twitter feed on Sunday nights, and it’s almost like it’s 2019 again.

None of that is better encapsulated than with the introduction of HOTD’s title sequence. The series premiere opted for more of an exposition-heavy cold open, so the first time anybody got to see the title sequence was with this Sunday’s episode, “The Rogue Prince.” Like Game of Thrones before it, the credits are artfully crafted by design firm Elastic, and like its predecessor, the HOTD title sequence takes viewers on something of a journey.

Instead of flying across Westeros and Essos, HOTD’s title cards go deep within Old Valyria, the ancestral home of House Targaryen, with a structure reminiscent of King Viserys Targaryen’s stone carving of the city. And the city is flowing with blood as it traces the family’s lineage from Aegon the Conqueror all the way to King Viserys and his daughter Rhaenyra. If you’re not familiar with early House Targaryen lineage, @HousetheDragons has a handy guide to who’s who on Twitter.

The part raising some eyebrows is the HOTD theme. Ramin Djawadi, who composed the original Game of Thrones theme, returned to Westeros for HOTD. But some viewers thought that with a new title sequence, they’d also get a new Djawadi theme, so it was a bit of a surprise when the opening credits rolled and the same old theme played.

The memes poking fun at the old tune becoming new again swiftly arrived. Did Djawadi just not want to mess around with perfection? Was HBO’s attempt to tie the two series together more for continuity’s sake, nostalgia, or the musical version of adding “The Origin of Batman’s Butler” to ensure brand recognition? It felt a bit off to me at first because I was expecting something different, but maybe in the weeks to come, as I see the title sequence more and more, it’ll click better.

Djawadi is Westeros’ not-so-secret weapon: For proof, look no further than the opening sequence of “The Winds of Winter.” But if people are already trying to hyper-analyze the music only two episodes in, the future looks bright for this young dragon upstart.