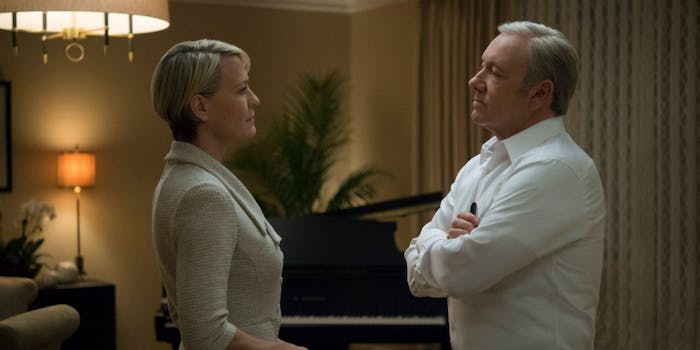 In season 4, ‘House of Cards’ finds its heart again

This review contains spoilers for House of Cards.

When the last season of Netflix’s House of Cards ended, it left viewers with a cliffhanger that should have been surprising but was at most expected. Claire Underwood (Robin Wright), wife of nefarious President Frank Underwood (Kevin Spacey), told her husband she was leaving him. The moment had been telegraphed for almost the entire season, a slow, meandering narrative that never quite found its footing.

Worst of all, it pit Frank and Claire against each other, undermining one of the show’s best qualities: seeing them pitted against the world (literally in some cases), and how enjoyable it is to watch them work with each other, not against. Fortunately, the fourth season goes a long way to rectify that. It gets the shot in the arm the show so desperately needed.

The last season had many creative stumbles as it dealt with Frank Underwood’s freshmen year as president, including character arcs and storylines that had no clear direction. It was as if Frank had been muzzled, his tenacious bite nipped in the butt as he realized how little power the president actually has. For Frank’s sophomore year, he comes back swinging, not from a position of weakness but from a position of power. This is Frank’s greatest strength as a character: the fact that his cunning ability to succeed makes you want to root for him even though deep down his success means hell for everyone around him.

That point is driven home by the return of Lucas Goodwin (Sebastian Arcelus), the former Daily Herald editor who was sent to prison for investigating Zoe Barnes’ death in season 2. Once out of prison, he continues his investigation, this time centered around Frank and exposing the corrupt politician for who he truly is. Goodwin’s character trajectory is a sad and ultimately tragic one, a real consequence of Frank’s actions and how it trickles down to even the most common folk. (This is explored even further as the season progresses.)

In a way, it mirrors the character arc of Doug Stamper (Michael Kelly) from last season, but accelerated. It was as if the writers and producers, led by executive producer Beau Willimon (who won’t be returning next season), heard the complaints of the last season loud and clear.

For at least the first six episodes, season 4 of House of Cards moves at a breakneck pace, advancing character arcs and subplots with far more precision and urgency than we’ve seen in over two years of the show. Unlike the slow political machinations of season 3 or the drawn-out tediousness of season 2, this latest season moves along steadily because, similar to season 1,  it gives Frank something to accomplish: get back Claire. If you thought the ending of last season would continue pitting Frank and Claire against each other, well, you are in for a surprise.

Besides giving Frank clear motivation, season 1 also had the advantage of showing how well Frank and Claire work together as a couple and team. If anything, season 3 showed how unengaging Frank is when he’s not out to achieve something and even more so, how uninteresting he is without Claire at his side. There’s a moment in one of the later episodes where Frank actually admits this, to paraphrase: “I’m nothing without you, Claire.” It comes after Frank deals with a very harrowing personal experience, and while it could be seen as Frank just advancing his own agenda by realizing he needs Claire at his side, Spacey plays it genuine. You actually believe him.

This reversal of events could be seen as the writers and producers realizing they shot themselves in the foot by putting tension between the two. However, this was Frank’s only recourse, as he realizes he cannot work against Claire if he wants to succeed. Even if this was an intentional course correction, it works. Not only is Frank more suited to succeed with Claire on his arm, so is the show.

One of the more brilliant aspects of the earlier seasons dealt with Frank and Claire’s impenetrable relationship, including a moment in season 2 where they have an intimate moment with secret service agent Edward Meechum (Nathan Darrow). The moment is dealt with very naturally and the characters move on as if that was just another day in their lives. There are similar moments in season 4, introducing concepts such as non-monogamy, which further illustrates the show’s ability to effortlessly present progressive ideas and reflect the modern societal age we live in.

The topic of non-monogamy isn’t the only contemporary issue the show addresses. Frank’s opponent this season, handsome Republican Governor Will Conway (Joel Kinnaman), enters the show as the seemingly polar opposite of Underwood: He’s young, social media-savvy, and has a great relationship with his wife. The show goes about furthering this by often intercutting between Conway and his family and Frank and Claire. It’s not the only time the show uses this technique to sage effect. It also deals with other hot topics like gun control and a not-so-subtle hint at ISIS, but the writers interweave these concepts far more effectively into the narrative than previous seasons.

The season slows down as it reaches the final stretch and shifts from Frank trying to win back Claire to actually winning the Democratic nomination and securing his legacy. It returns to some of the political machinations of last season, but unlike that season there’s a difference. Where the beating heart of the show was slowing down the more Frank and Claire were at odds, the show gets a renewed sense of life as the heart now pumps faster and harder, reminding Frank and everyone else that House of Cards wouldn’t be what it is without the beating heart that is Claire Underwood.