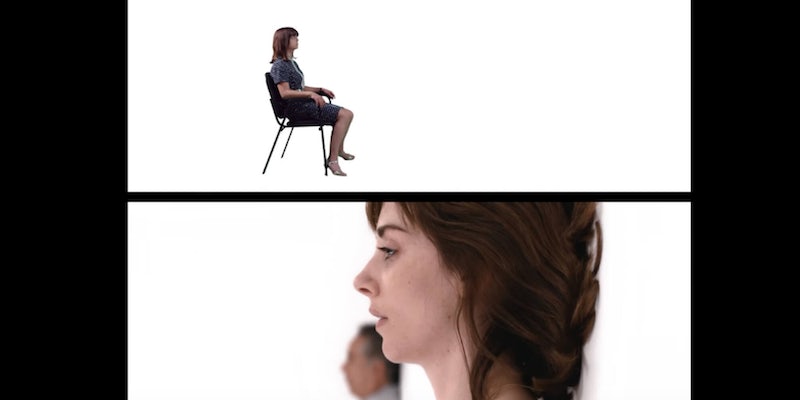 Joe Badon says 'Horse Girl' has a lot of similar shots, but commenters aren't so sure.

Netflix’s Horse Girl tells the story of a woman (Alison Brie) on the verge of a nervous breakdown, and it toes the line between surreal and terror as we follow her into the fractured unknown. It’s a film that left a lot of people confused, but it also offered a relatable depiction of mental health.

This week, Joseph Estrade, a film editor and actor, posted a video to YouTube comparing shots from Horse Girl with Joe Badon’s 2017 film The God Inside My Ear, which also follows a woman (Linnea Gregg) who might be losing touch with reality (and which Estrade worked on). It compares the use of the white void in both films, though that shot style has been used in several movies and TV shows (Stranger Things, Under the Skin), and suggests the endings of both films are also similar. But with the context and audio stripped from the scenes, it’s hard to make a case.

Brie has been very open about the film’s personal ties, telling Vulture: “My whole life I’ve wanted to make something about my mother and my grandmother. My mother’s mother lived with paranoid schizophrenia, and my mother grew up in a really traumatic situation.” She said she started writing the film in 2018, after the “deepest bout of depression in my life.” Director and co-writer Jeff Baena told Syfy that he brought in the horse storyline (which is not in The God Inside My Ear).

A Reddit thread about the similarities leaned more toward it just being a coincidence or following familiar indie-film beats. A commenter who’d recently watched both stated, “There are a ton of fundamental differences on how each film goes about these supposedly similar plot points.” Another said, “I could make this video for any two vaguely art-house-y indie movies.”

In another thread that claims the film is a “blatant rip-off,” Badon went more in-depth about the similarities, some of which are “more mundane” and some of which are “SPOT ON,” breaking them down by frame. (Brie told Vulture that “If there’s not a Reddit message board about this movie, I would be shocked and frankly appalled,” though this might not have been what she was talking about.)

The Daily Dot has reached out to Badon and Estrade for comment.