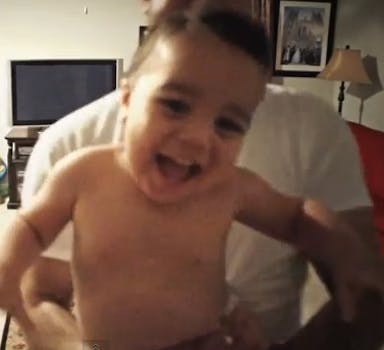 While mom’s away, dad creates an awesome time lapse

Being "a comprehensive report on the happenings of father and son while mama is away for the afternoon."

First the toys come out. Then they spread out on the floor. The kid knocks the basket over, but it simply doesn’t matter. Mom’s away, so the boys will play—for hours and hours and hours on end.

Emio Tomeoni is a Kansas City filmmaker with ties to NBC Universal. Tomeoni’s wife Stephanie apparently had to work one afternoon, so the man did what any father of an infant would do if he had an afternoon alone with his kid: he reverted back to his childish ways.

Throughout this adorable 4-minute time-lapse, the two guilty parties manage to get into every sort of trouble that two kids at heart can muster up.

They don hats, throw stuffed whales at each other, stand on tables, and wrestle on couches. Tomeoni throws his kid in a box and shuts the lid then drinks juice where he’s probably not supposed to.

The two play a keyboard with their feet, frolic shirtless around the living, and eat sandwiches while sitting on the table. They shoot hoops and play African drums. Tomeoni takes a call from his wife and then changes his kid’s diaper. After that is when the cleanup begins.

The whole process is over in a minute—or less, if you’re keeping time with the time-lapse. When it’s over, the room is clean; the kid’s diaper, as well. It was like mom never left. But then there’s that video.