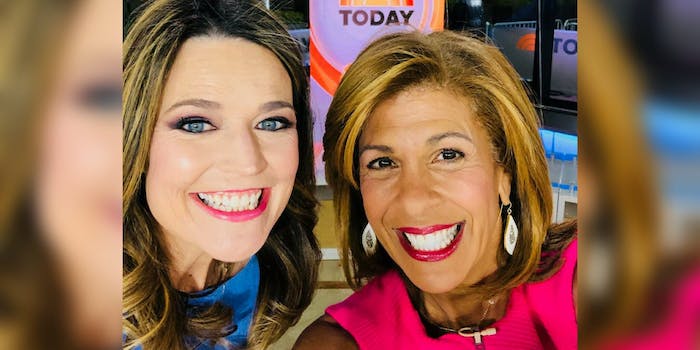 Hoda Kotb and Savannah Guthrie are the first female duo to anchor the 'Today' show.

Just over a month after NBC News fired Today show anchor Matt Lauer for workplace sexual harassment, the network has announced his replacement.

On Tuesday, Hoda Kotb made her debut as Today show co-host with Savannah Guthrie, during the show’s first two hours of the program. According to the announcement, made by NBC News Chairman Andy Lack, Kotb will continue to co-host the show’s fourth hour with Kathie Lee Gifford.

“It’s 2018 and we are kicking off the year right because Hoda is officially the co-anchor of Today,” Guthrie said in the announcement. “This has to be the most popular decision NBC News have ever made and I’m so thrilled.”

WATCH: We're kicking 2018 off with some big news: Our Hoda Kotb is officially the co-anchor of TODAY!

Kotb began her career reporting and anchoring across New Orleans and Fort Myers before joining NBC News in 1998 as a correspondent for Dateline. She has joined the Today anchor desk often over the years, co-hosting the fourth hour of the show in 2008, then filling in with Guthrie after Lauer’s firing.

Together, Kotb and Guthrie are the first female duo to anchor the show, but are not the first all-female morning show duo, the title of which goes to ABC News’ Diane Sawyer and Robin Roberts.

“Hoda is, in a word, remarkable. She has the rare ability to share authentic and heartfelt moments in even the most difficult news circumstances,” Lack said. “It’s a tribute to her wide range and her innate curiosity.”