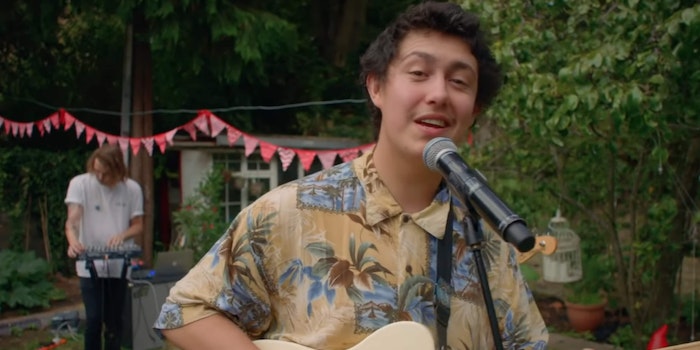 Musician Hobo Johnson was accused of giving a woman an STI.

Musician Hobo Johnson (real name Frank Lopes Jr.) was accused of giving a woman herpes, but now she says it was a “miscommunication.”

On Wednesday, Lopes became a trending topic on Twitter after a woman who claimed to be a friend of the accuser alleged that he removed a condom during sex (known as stealthing) when the two met at a meet-and-greet and subsequently gave the friend herpes. In another tweet, she said the friend attempted to go to “the authorities years ago when it happened, but nothing came of it.” 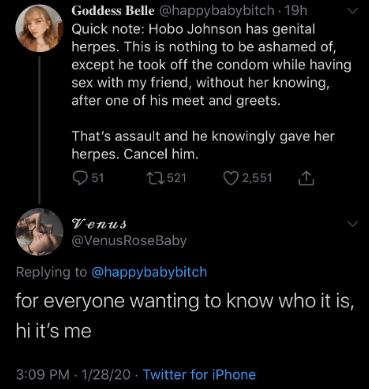 The original tweet has now been deleted, as has the account, but the accusation started conversations about sexual assault, cancel culture, and the context of Johnson’s lyrics. On Wednesday evening, the accuser, under the handle @VenusRoseBaby, attempted to clarify things in a series of tweets, stating that “Hobo Johnson is not a rapist” and that the sex was “consensual.” She apologized and added that she “miscommunicated to a friend because I’m sick and scared” and wasn’t “trying to hurt anyone.” 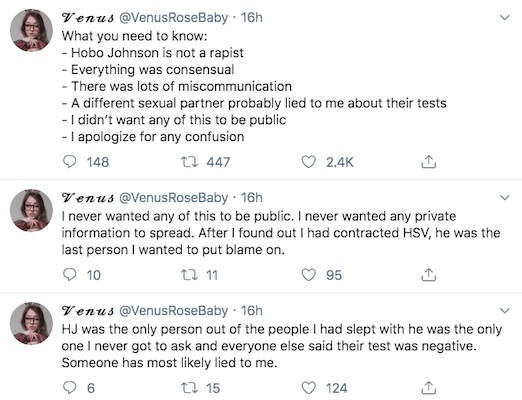 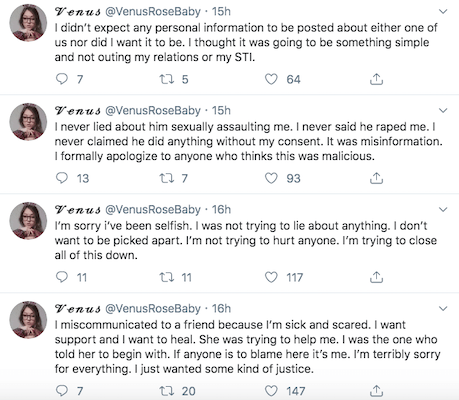 Lopes responded on Instagram, stating: “I struggled with how to address these untrue allegations about me without causing harm to A or any victim of sexual assault. I think it is incredibly important that we listen to and believe victims.” He also asked for people to stop harassing the woman: “Tearing someone apart on the internet, especially after they’ve apologized, isn’t right.”

All this said, removing a condom during consensual sex is sexual assault and some states (including California) have moved to legally classify it as such.