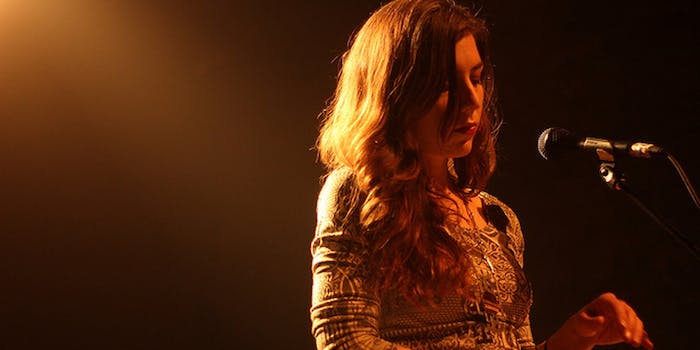 Science has found a way to identify the elusive hipster band

Trolling or data mining? Or are they the same thing now?

Scientific data has brought us many technological advancements in the new millenium. Now, we have science to thank for one of this century’s greatest achievements: Identifying the most “hipster” bands of our time.

Web data “crawlers” Priceonomics sifted through our most important, defining generational data—a musical act’s Facebook likes and its Pitchfork reviews—to find the true essence of a “hipster” band, i.e., a band or act you’ve probably never heard of. Or maybe you know their “early stuff”? Oh, you don’t know them? They’re really good. But the early stuff. The third album was crap. A Priceonomics data analyst describes the criteria:

“So, the first scientific criterion for identifying a hipster band is that Pitchfork likes them. Pitchfork reviewers like a lot of mainstream music, however, so that’s not enough. The second criterion is that not many people should like that band. The music must be obscure so that people can say, “My favorite band is X, you’ve probably never heard of them.”

To measure obscurity, we looked at the number of Facebook likes the Pitchfork review received. All else being equal, we expected a hipster band to get fewer Facebook shares than a non-hipster band with the same score.”

Based on this aggregation, they plotted the resulting data on a chart, the red dots showing acts that might be labeled “hipster,” but aren’t, based on their popularity. The blue dots plot the truly “hipster.” 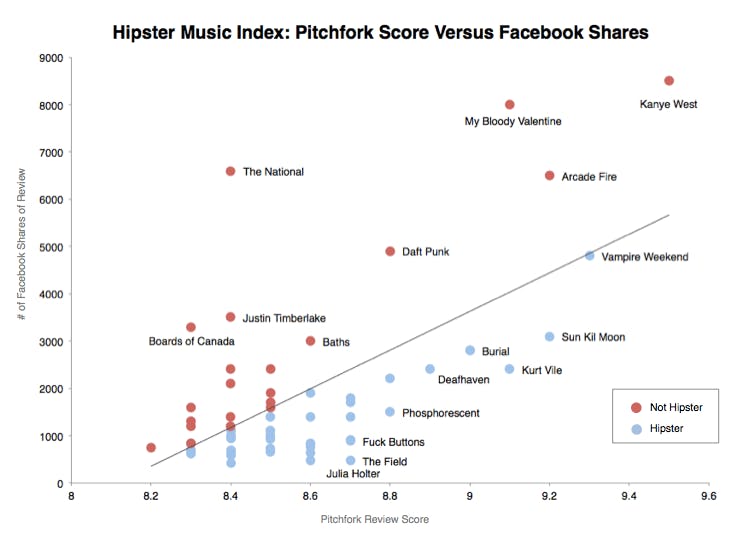 By this plotting, the most “hipster” acts include Julia Holter, the Field, Iceage, These New Puritans, and Fuck Buttons in the top five. This also continues the heated debate about whether Vampire Weekend is a “hipster” band, or just a really awful, derivitive one. They follow up the chart with more scientific reasoning:

“The model appears adept at separating critically acclaimed but mainstream bands (Arcade Fire, The National, et al) from the critically acclaimed but obscure (Fuck Buttons, Sun Kil Moon, et al). We gave Sun Kil Moon’s last album a listen, and not only was it excellent, but it was filled with depressing lines like “Carissa was thirty-five, you don’t just raise two kids and take out your trash and die,” which make it unlikely it will ever become a mainstream hit!”

What does this tell us? Well, mainly that “hipster,” much like “indie,” is a tired, lazy descriptor for bands, that it never really identified bands (or people) in the first place, and that it should be given a Viking funeral. This also might have been some expert-level trolling disguised as data mining. Check out the comments on the post for the beehive of dissent it created.