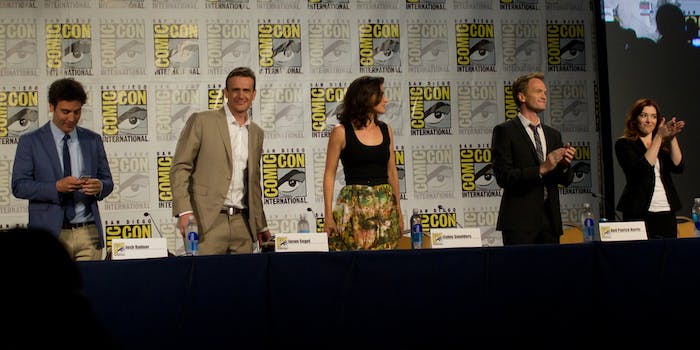 Fans now have a chance to win iconic props from the How I Met Your Mother set in the mother of all giveaways.

In a promotion for the complete series box set, Twentieth Century Fox is offering props that appeared on the show throughout nine seasons in a Tumblr contest—including Robin’s Vancouver jersey, Ted’s hot dog costume, and the parking meter that Barney’s father ripped from the street, with each coming with an official certificate of authenticity. While only items from the first two seasons are currently available, props from the later seasons will be offered as the contest progresses.

A “Flash Sweepstakes” will occur every Monday from Sept. 22 to Oct. 20 at 8pm ET, when fans will have a three-hour window to submit entries to win a specific item from the show. The first one up for grabs is the pink boom box that appeared in Robin Sparkles’ “Let’s Go to the Mall” video.

For HIMYM creators Carter Bays and Craig Thomas, giving the props to fans was a way to thank them for almost a decade of support.

“You guys rooted the show on, made it a part of your life, and spent every Monday night with us for nearly a decade,” Bays said in a statement. “We will always be grateful for that. As a way of saying thanks, we’d like to give you the opportunity for a piece of How I Met Your Mother to actually, physically belong to you. From all of us at HIMYM, thanks for watching, and good luck!”

“We hope that you treasure and enjoy these beloved pieces of HIMYM‘s soul, or that you at least don’t sell them on eBay,” Thomas added.

You can also enter your name into a drawing to win props during the week, which are distinguishable by the “Win Me!” label on them. A winner is chosen every week and is different from the “Flash Sweepstakes.”

One fan will win the grand prize: the actual bar from MacLaren’s with bar stools, which is perfect to either toast the end of the show or drink to forget that the much-hated finale ever happened.

Photo via vagueonthehow/Flickr (CC BY 2.0)