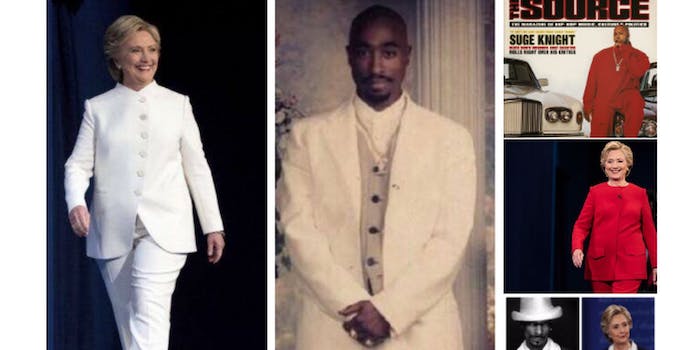 The presidential candidate opens up about meme culture.

Was Hillary Clinton paying homage to Death Row Records during the three presidential debates? How else does one explain these subversive outfits that mirrored classic looks from hip-hop icons Suge Knight, Tupac, and Snoop Dogg?

On Wednesday, during an interview with the Breakfast Club, Clinton came clean.

“I think Death Row and a lot of other hip-hop fashion sources have influenced my look,” Clinton told the hosts.

She’d just seen the meme from last week, of course, and was joking. But her visceral laugh at being shown it for presumably the first time was endearingly genuine.

During her interview, however, Clinton stayed mum on whether or not she preferred disc one or disc two of Pac’s seminal All Eyez on Me.