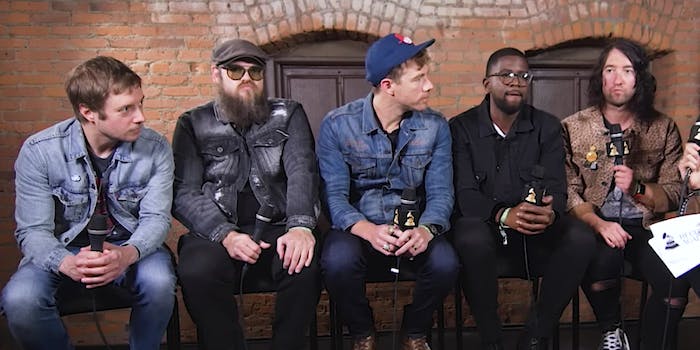 The song is being adapted into a fully scripted rom-com.

If you ever loved the Plain White T’s massively popular song “Hey There Delilah,” you’ll be ecstatic to find out that the song is in the beginning stages of a television adaptation, according to the Hollywood Reporter. And if you never loved the song—well, the show could be coming anyway.

Members of the Plain White T’s are collaborating with Lively McCabe Entertainment and Primary Wave to develop a romantic comedy script based on the 2006 chart-topping ballad about lovers separated by distance. The show will reportedly expand on the track’s plot’s story and characters, and later this month, the band will pitch it to different studios and networks in Hollywood.

“Hey There Delilah” made its rounds over a decade ago as a certified platinum song. The track earned Grammy nominations for song of the year and best pop performance and spent 35 weeks on Billboard’s hot 100 charts, twice at the peak position.

But the idea of the pop song turning into a TV show has provoked mixed feelings.

First of all, doesn’t it already exist?

but the tv version of "hey there delilah" was the oc

Second of all, it’s just too easy not to make fun of the cheesy lyrics that are definitely stuck in your head right now.

"Hey there, Delilah
What's it like in New York city?
I'm a thousand miles away
But, girl, tonight you look so pretty
Yes, you do
Times Square can't shine as bright as you
I swear, it's true"

You can get at least six episodes out of that verse. https://t.co/v3rQHUrnRo

u might be wondering "who asked for a tv show based on plain white t's hey there Delilah?" well wonder no further – the answer is me

But no matter their hang-ups, people are plenty happy to offer their help on the new show—and related projects.

All that the “Hey There Delilah” script needs is a vampire, murderous cheerleader, and maybe a somewhat obscure superhero and it’ll be a guaranteed hit on The CW

hey there delilah: the tv show!

flirting with me in study hall and then ignoring me on AIM: the broadway musical!

Lead vocalist Tom Higgenson told the Hollywood Reporter that the transition from music to television will be a chance for the band to connect with an entirely new audience. “I’m so excited to have an opportunity to give a new generation the chance to form their own connection with the song, and fall in love with its story through this new project,” he said.