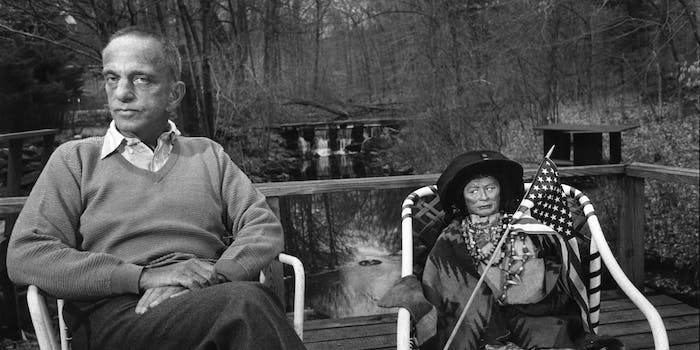 ‘Bully. Coward. Victim.’ dives deep into the life of an ‘evil’ man

Roy Cohn's life and all of its complexities are on full display.

Roy Cohn was an evil man. Many of the family, friends, allies, and enemies who make an appearance in Bully. Coward. Victim. The Story of Roy Cohn said as much about the former Joseph McCarthy lawyer in a variety of colorful ways; one friend described him as “Dracula coming out of the box at midnight.” At one point, Cohn’s cousin David Marcus notes that “every family has its Roy Cohn,” to which he said his mother told him, “I hope not. The world would be a terrible place if that happened.”

RELEASE DATE: Spring 2020
DIRECTOR: Ivy Meeropol
STREAMING: HBO Go/HBO Now
Through the personal lens of her family history, director Ivy Meeropol attempts to lay out the personal and professional complexities of Roy Cohn, whose influence on American culture and politics is still felt decades after his death.

You won’t really walk away from Bully. Coward. Victim. thinking otherwise. The film might complicate who Cohn was, but it does not try to humanize his actions—and some aspects of his life, his choices, and what he might’ve been thinking still remain shrouded in mystery to this day. The title of the documentary even comes from the AIDS quilt panel made for Cohn, who died of the disease in 1986. But Bully. Coward. Victim. starts to peel back the layers as it blends a deep family history that counters Cohn’s own history, one that we’re still feeling the after-effects of more than three decades after Cohn’s death.

For director Ivy Meeropol, the story of Roy Cohn is personal. Her paternal grandparents are Julius and Ethel Rosenberg, the two civilians executed in 1953 after being found guilty of spying on the U.S. for the Soviet Union; Cohn was one of the prosecutors who got the Rosenbergs convicted. Decades later, her father Michael and her uncle publicly revealed themselves as the Rosenbergs’ surviving children and have spent much of their adult lives looking into whether Cohn and U.S. government framed their parents.

“I wanted to use my father and the family’s story to bring an emotional depth and have a real example, a tangible example of someone—my father and uncle—people whose lives were truly destroyed by Cohn in a very direct way,” she told me.

Meeropol already explored her family’s history in the 2004 documentary Heir to an Execution. So while there is a little overlap between the two films as well as new footage and parts of her father’s story to explore, Meeropol made a conscious decision to not make, as she put it during the New York Film Festival recently, “Heir to an Execution Part 2.” Instead, she used her father’s story to add an emotional depth to the film but always wanted to go back to Cohn.

It’s certainly tempting to explore those webs that expand beyond Cohn for large stretches of time, and at times, it can be a little frustrating that those threads only go so far. But the life of Cohn is embedded deep into the history of the United States for more than 60 years, even though he’s been dead for at least half of them; President Donald Trump was one of his proteges, and Cohn helped him think of himself as someone who could become a nuclear arms negotiator several decades before becoming president. (Yes, really.)

His own words paint a damning picture, and when those fail to do it, the people who knew him helps expand upon it; the only people featured in Bully. Coward. Victim. who never met Cohn were Angels in America playwright Tony Kushner and the actor Nathan Lane, who played Cohn in the Broadway revival. He grifted and scammed his way toward the upper echelon of New York society and abused his power whenever he could. Sometimes, just because he could.

It’s not the entire picture. Where’s My Roy Cohn?, another documentary that zeroes in on the controversial figure, is now playing in select theaters. Shortly before the world premiere at the New York Film Festival on Sept. 29, the FBI released its file on Cohn. But by starting to piece it together, we’re starting to get a clearer idea of not only who he was, but just how he helped shape our present.