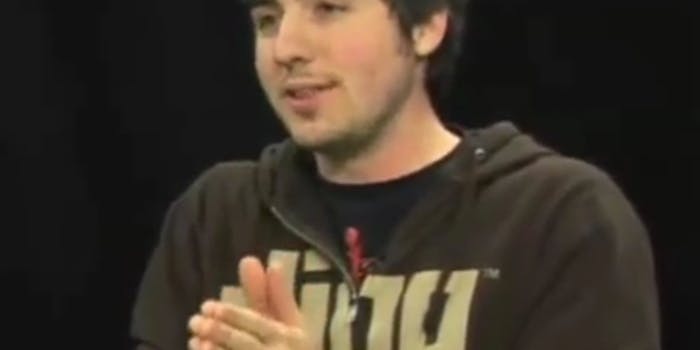 The Hater has noticed that some of this week's biggest tech stories could have been ripped from blog headlines in 2004, and he doesn't like it one bit.

Usher’s voice is crooning from the radio, we’re poking at Digg to see what it does, NBC’s coverage of the Olympics is irritating everyone, and we can’t get past G4’s violent devouring of TechTV.

If you look at the calendar, it’s allegedly the second half of 2012—but it feels like some jerk (probably Usher?) just hit the repeat button on 2004. Writers point out historical occurrences as frequently as history repeats itself, but we need to have a #realtalk about this.

Why did the cosmological forces surrounding us think it would be funny to conjure up the worst aspects of 2004 and repeat them eight years later? There has to be a statute of limitations in the Geneva Convention on forcing us to watch a new Spider-Man movie or hear a new Scissor Sisters album (if anything, kikis are certainly outlawed in Sharia law).

Pop culture aside, the repetition in the tech-webby world has been the most, well, repetitive. We’re either pretending what is old is totally new again (Digg), gawking at a Silicon Valley company that’s clawing out of its cocoon (Google’s IPO vs. Facebook’s), or once again expressing our repressed feelings about the nerd-catastrophe (G4’s blood-sucking takeover of TechTV).

Let’s take a look at three events that are repeating themselves and we just need to put to rest.

In August 2004, Google opened at $85. Four years later, Facebook trotted its shares out at $38.
Facebook faltered by ending the day flat, while Google closed higher at $100. But we all somehow profited by complaining about both of their debuts.

An ABC News report from 2004 said Google’s opening “failed to live up to months of hype” (it’s now priced $642), and  you already know Facebook’s story. Everyone, including the Taiwanese, agreed that it fizzled and declared it a failure. The only analysis I can offer is that a share of Facebook is the same price as an appetizer and two entrees from Applebee’s. COINCIDENCE?

In the past eight years, we haven’t gotten any better at analyzing IPOs, and we should probably shut up about it. Television talking heads and armchair financial analysts both handle the guessing game of an IPO’s opening price with the grace of a finless, blind dolphin trying to find dinner. A poor, finless, blind dolphin that should be released to the bottom of sea.

In late 2004, Kevin Rose—dressed in oversized plaid button-up and baggy jeans—told us he had something “really cool” to show us on G4TechTV’s shell of a former self, The Screen Savers. It was Digg “with two Gs” dot com.

That two-minute segment launched a really cool user-powered website. How neat that you can control a webpage; but maybe we should have foreseen the troubles the site would have when Rose failed to disclose that it was his website. Perhaps it was his ploy to distract everyone by talking about Digg with the always lovely Sarah Lane. She’s one person we’ll never hate on.

The fun lasted for about four years until they rolled out a shitty redesign and the ill-fated DiggBar, and cultivated a user base that was more annoying than IKEA’s child play area on a Saturday afternoon. Rose bolted to build apps (and finally learned to sell his companies to Google) and Digg was sold for a price between $500,000 to $16 million. Regardless, it’s chump change compared to Google’s reported offer for Digg of $200 million in 2008.

Anyway, eight years later, we’re looking at Digg with fresh eyes. What does it do? It does a nice job of aggregating news on the Internet, although we don’t really need another website that does that. And, uh, we’re big fan of the white space! That looks nice. Nice nice nice.

But good luck, Digg! I don’t want to write another piece in eight years on how you fucked up again.

TechTV was never going to last. It was an oasis of smart Web and technology-centric shows on our dumbed down cable box. The shows were informative and the hosts were so likable.

So, Comcast bought TechTV in 2004, fired everyone, and dropped the IQ of the network by merging it with their lame video game network, G4. Eight years later, G4’s schedule is just Cops reruns.

Earlier this week, TechTV’s former first man and host Leo Laporte said something pissy on Twitter toward Kevin Pereira (he was from G4) and good-guy Adam Sessler (who was on TechTV and recently left G4). LaPorte called them “tainted by G4” and wouldn’t have them on his podcast network, TWiT. Which, let’s be honest, isn’t the worst thing to happen to Sessler or Pereira.

Pereira blasted back, fans of both Team G4 and Team TechTV got annoyed at Laporte, and even TWiT employee Sarah Lane admitted in her recent Reddit AmA that “Leo said something stupid.” There’s really no wrap-up (he sort of apologized to Pereira) to this fight aside from making LaPorte look like a curmudgeonly, stubborn old man.