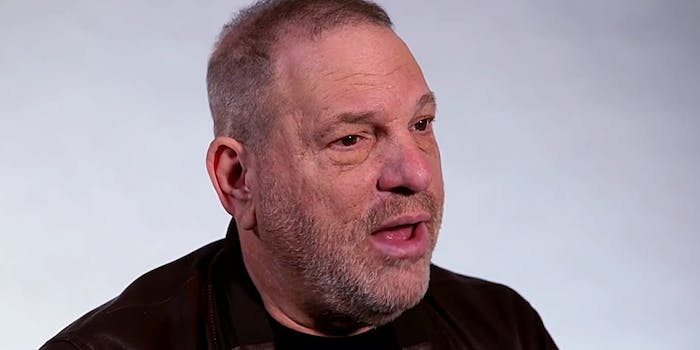 Many do not need to relive what men like Weinstein did.

This week, artists Joshua “Ginger” Monroe and Plastic Jesus installed a statue of Harvey Weinstein in Hollywood, depicting the disgraced producer reclining sleazily on a casting couch. However, because the artwork is so close to the Oscars’ red carpet, some fear the statue will do more harm than good for the women Weinstein reportedly exploited.

The statue, aptly titled “Casting Couch,” portrays a golden Weinstein with an opened robe, resting smugly on a couch as if he were about to proposition sex. In Weinstein’s right hand rests an Oscar, jutting out from his crotch like an erection, while his free hand rests over the couch’s arm as if to invite the viewer to come join him. It’s not just creepy; its near literal creepiness is amplified for shock value—but at who’s expense?

“The whole couch and the entire image it gives off was to me a visual representation of the practices and methods that are used in Hollywood with these big powerful people,” Ginger explained to the Hollywood Reporter. “They have money and power to give jobs and they use that for their own sexual gratification and there’s no better way to visualize this than the way we did with the casting couch.”

Some on Twitter agreed with the artists, saying it was an excellent commentary that directly points out Hollywood’s problem with powerful men exploiting women.

This is a very moving piece of art. I hope they keep it for future generations.

#Futurama did it first. pic.twitter.com/KyWnBvfVzp

Meanwhile, others see the statue as harmful, suggesting that Weinstein’s reclining, half-naked body is the last thing any sexual abuse survivor wants to see while headed to the red carpet. That’s because “Casting Couch” doesn’t actually highlight sexual assault survivors’ struggles or give a voice to the trauma that victims experience after an assault. Rather, the statue simply focuses on Weinstein and only Weinstein.

I don't know whether to laugh or be triggered on behalf of all his victims#Oscars https://t.co/DbqEkW2Ccv

Did the artist think of the many women affected by this monster's vile behavior? Who wants a visual reminder of that? – Statue of Harvey Weinstein in a bathrobe appears in Hollywood ahead of Oscars https://t.co/O4u5gqnuPM via @ew

Pre-Oscars warning: a giant gold Harvey Weinstein with a half-open bathrobe is sitting at the intersection of Hollywood and La Brea. https://t.co/AR7ziNE48f

But hey don't worry #TheOscars has 45 million swarovski crystals to block out the shrine to Harvey Weinstein on the stage. #bedazzled them with BS while nothing really changes in Hollywood.

He's not ashamed already?? What about people who r his victims? They want to see that? Not likely.

I’m sick of hearing about this too!!!! The powers tha be knew!!! WTF

There’s also the fact that “Casting Couch” is selfie-friendly, which means Instagram users are heading over to the art piece just to pose with it. Some worry the statue’s viral potential simply turns a commentary on women’s long-held pain into a wacky opportunity for likes on social media. Not that Ginger or Plastic Jesus are concerned, though.

“Everyone wants a selfie, everyone wants to be part of the experience,” Ginger explained to the Reporter. “As Mark Twain once said, ‘Against the assault of laughter, nothing can stand.'”

In the end, it seems like “Casting Couch” is the work of male artists who thought about their own virality over the type of message that would help survivors.

Outside a friends office on Sunset Blvd. this artist made a golden sculpture that’s getting some attention today! #artist #publicart #harveyweinstein #goldensculpture #oscars #oscar #castingcouch

Harvey Weinstein rapes and assaults dozens of women and Plastic Jesus makes a statue of the guy, turning the whole situation into a "funny" Instagram post. This town is doomed. pic.twitter.com/xjW4xEnmdX

This isn’t the first time Ginger found himself under scrutiny over his art. Back in 2016, the Cleveland artist worked alongside Anarchist group INDECLINE to put together a series called “The Emperor Has No Balls,” depicting a naked Donald Trump with an incredibly small endowment. Critics later claimed the statue was ageist and shamed non-normative bodies at marginalized Americans’ expense, skirting any real criticism of the future president’s behavior.