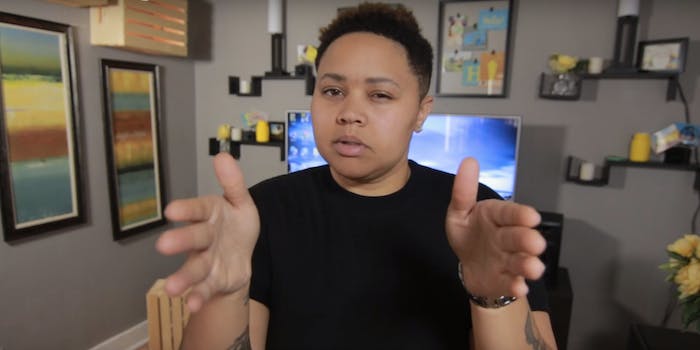 HartBeat’s comedy will make you spit tea out your nose

Outspoken and not afraid to dance around in a watermelon bikini, Hart is one of YouTube’s best.

Inside the L.A. home she shares with her girlfriend, Hart steps onto an apple box in front of her camera, hits record, and lets her signature “heyyy!” start the video. Then it’s off to the races as viewers ride through the comedian’s mind, zipping in and out of vlogs and sketches about college, lipstick, parents, and sexiness.

Since starting on YouTube in 2009, Hart has stood out as a creator because of her ability to address complicated, personal topics such as sexuality, gender stereotypes, mental health, and race through comedy. For example, in her classic video “Watermelon,” Hart gives a brilliant response to the question “If you love women so much, how come you don’t dress like one?”

(Anyone who dances around in a watermelon bikini gets a thumbs up in my #WCW books.)

Reminiscent of Ellen DeGeneres’ “Calling God” sketch, Hart recently released a sketch called “She Told Me Off!!” about her comical exchange with God about dealing with depression. Only Hart, in a single video, could transition from talking about advice she received from a stripper named Dolores to talking about living with mental illness. The video has since influenced other creators such as Ashley Mardell and Laci Green to share their own battles of dealing with depression and through this series, changing the way viewers are perceiving mental illness.

As a black, LGBT+ creator on YouTube, Hart represents communities often overlooked or misrepresented in mainstream media. That said, she’s not just a black creator or a lesbian creator, but a popular comedian who is also both of these things. It’s her influence as an incredible, laugh-till-you-spit-tea-out-of-your-nose storyteller that is propelling her career, and I can’t wait to see what comes next.