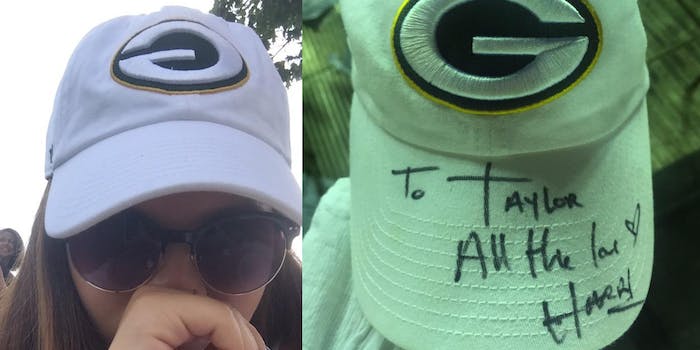 How a One Direction fan named Taylor resurrected an old dream

1D fans are super into Harry Styles signing a hat for a fan named Taylor, 'like Swift.'

One Direction fan @otrataylor experienced a dream moment at a 1D concert this week when Harry Styles signed her hat in the middle of the show.

On its own, this isn’t a hugely big deal for anyone other than @otrataylor and her friends. But since her real name is Taylor, footage of Styles signing the hat was enough to bring back sweet, sweet memories from the Harry Styles/Taylor Swift romance.

Checking how to spell her name, Styles appears to ask, “Like Swift?” and now Harry/Taylor shippers are freaking out.

Taylor (not Swift) even tried to clarify that it was a fluke with little to do with Taylor Swift, but it was too late.

Haylor fandom is still alive and well, it seems—three years after their breakup. But a few fans had a simpler explanation:

Hopefully the Green Bay Packers are even half as excited as One Directioners over this time in the spotlight.