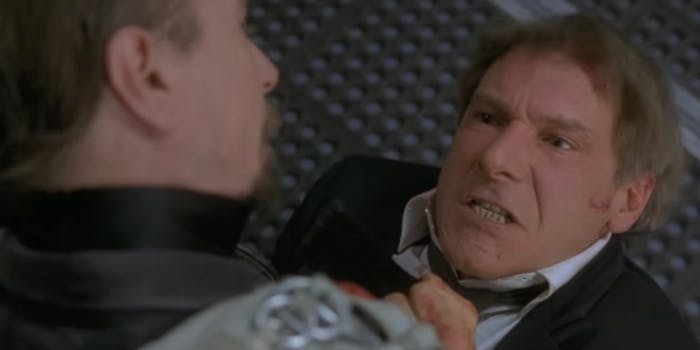 Between Star Wars and Donald Trump, Ford is in quite the spotlight at the moment.

Harrison Ford has a few choice words for Donald Trump after learning that one of his characters inspired the business mogul.

In a recently New York Times article about how voters may sometimes look to fictional leaders in times of trouble, Trump spoke of his own inspiration. It’s not Star Wars scoundrel Han Solo or archaeologist Indiana Jones, but rather Ford’s character in Air Force One, a president who has to fight a bunch of Russian terrorists who have taken over his plane.

“My favorite was Harrison Ford on the plane,” Trump told the New York Times. “I love Harrison Ford—and not just because he rents my properties. He stood up for America.”

Ford, who’s in the middle of a global press tour for The Force Awakens, may have missed the initial news story where he was namechecked by Trump. But now he’s aware of it after a journalist from Australia’s Studio 10 asked him about it.

“Donald, it’s a movie,” Ford said, displaying more than a hint of his trademark exasperation. “It’s not like this in real life, but how would you know?”

Harrison Ford on his super fan Donald Trump from that fantastic interview with @AngelaBishop! #studio10 https://t.co/mSNZaQSAFO

Ford is 73 years old, and he can’t believe he had to actually tell someone like Trump that movies aren’t real life. Give Ford a medal.