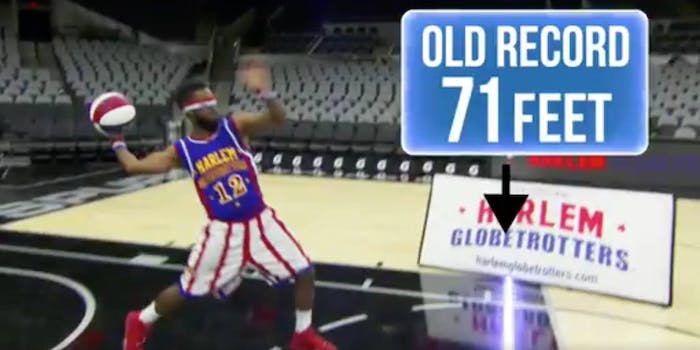 Over the last couple of years, YouTube’s trick-shot stars Dude Perfect have swiped a few Guinness World Records from the Harlem Globetrotters. On Guinness World Records Day on Thursday, a day in which hundreds of thousands of people from around the world line up to take a stab at history, America’s favorite basketball team not only reclaimed what was theirs, but they smashed a few more records for good measure.

Bleacher Report has edited down the team’s nine new record-breaking performances in one six-minute video, and a few of the shots you have to see to believe.

Time to rewrite the record books because the Harlem Globetrotters are breaking every record in sight! (via @Globies) pic.twitter.com/wjhXjCTDs7

But #RealTalk: The Globetrotters’ record of most three-pointers made by a pair in one minute, at 22, will not last long. I’m going to start training tomorrow.